Who's got their back? 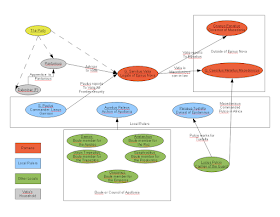 One of the (many) pieces missing from my campaigns has been the relationships between NPCs. Patrick Halter over at Renovating the Temple has a nice graphic of the relationships in the village of Hommlet, which has inspired this post in an elliptical manner.
In my reading of classical history one of the things I've noticed is the importance of legally recognized tribal relationships in the political systems of both Athens and Rome.  Now, for whatever reason, I've always had a conception that  tribe was a social organization of blood relatives, this isn't necessarily the case in the classical world, as the Romans created brand new tribes several times during the Republic.  Layer on top of that the client-patron relationships cultivated by the Romans and you find that bilking that merchant just brought you the enmity of a whole slue of people. (By the way, this is still common in less developed {less socially mobile?} parts of the world, read about some of the troops experiences with local suppliers in Iraq.)
Getting back to my point, along with generating an NPC's description, I'll need to generate their tribe and patron/clients.  Obviously minor NPCs don't need all the details, but I do need to have idea about who they can call on for support if the party gets out of hand.

The diagram above lays out the relationships between the Roman hierarchy and the rulers in the area, along with other NPCs mentioned in 20 Questions.  Of importance to this discussion are the seven families who rule the city of Apollonia, where their characters will initially be based.  Most of the NPCs that the party will meet will trace a relationship to one of the seven families, or to their enemies as given in the table below.


With this back ground I can create Alcon the Smith.  A relative of the Proskyntos, when the players bring in some dwarf made armor for refitting, he'll pass the word to Epaphroditus who would like to break the Geraki monopoly on the dwarven trade.  This may lead to contact from Proskyntos or, if Asterpaios hears of it, an assassination attempt as the Geraki work to maintain their lucrative trade.

Note that all of this is invisible to the players, unless they decide that their characters would like to find out why the assassin was sent.  It however enables me, as the DM, to determine which factions will approach the players as the characters become more powerful and thus more valuable as allies, and which hold grudges against them.

Hmm, maybe I'll add a campaign customization to my NPC Generator to determine which family they are aligned with.