Mythic encourages using a movie paradigm for setting up adventures, where you define the set up for a 'scene' and it's conclusion, the run what's in between.  Travel or time between scenes is ignored as there is little to no action happening with the characters.  This is extremely different from the way I've been gaming since 1977, to the point where it qualifies as a new and exciting idea.

Inside of the scene you can resolve the action with Mythic another system or a combination of both systems.

Mythic defines the Chaos Factor as a mechanism to add randomness to a scene or to the action.  By default the Chaos Factor starts at five on a scale of 1-9.  Mythic Variations provides suggested starting Chaos Factors by the genre that you are playing.  The Chaos Factor may come into play at the beginning of a scene or whenever you ask a question on the Fate Chart and roll doubles. 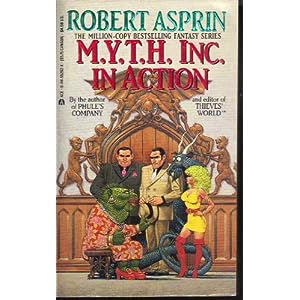 Mythic in Action  (with apologies to Robert Asprin)

The setup:  As I said in my previous post I had wanted to do some solo play to flesh out my campaign setting.  I had already started this from a literary perspective with Teuta - Honor among Thieves, now I'll do it with Mythic.

Lists
There are three main lists to maintain in the game, PCs, NPCs and Threads.  Threads are the goals of the characters, they may be individual or group.  And you track the Chaos Factor, increasing it as things spin out of the PCs control and decreasing it as they get a handle on the situation.

For PCs I have a standard adventuring party of four, and I'm using 1e for the game system.


Tueta Restio – (f) Thief Level I. Daughter of a rope maker and a low level member of a thieves guild, whose head has just been assassinated

Lucius Octavius Rufus – Magic User level 1. Son of a prominent Roman plebian family, he is a student at the Stoa [The academy at Apollonia].

Maedus – Fighter I. Barroom brawler and a known associate of Lucius Rufus.

Sumakos – Druid 1. Aspirant of Pan. Another hades-raising associate of Lucius Rufus, delights in urinating on the temple of Apollo.

For NPCs, besides those mentioned in the Teuta prelude linked above, I included almost everyone I mentioned in Who's got their back?  Most of those don't have any relation with this party - yet.  But as I said I want to develop the gae background.

I also came up with four Threads.
(1) Teuta wants to get out of town rather than work for the new Guildmaster
(2) She would like revenge on her old master's killers
(3) Lucius has found directions to an old, theoretically abandoned keep (B1. In Search of the Unknown)
(4) The priests of the temple of Apollo want to find the guy who's pissing on the walls at night


Action!
Scene 1 - Get out of town.
Starting right after the prelude, Teuta needs to get her friends and leave town.  The action will start with her going to an inn to meet them and ends when they get out the gate.That's it, that's all the planning a scene needs.  Now we use the Fate Chart to ask questions and determine the details of the action.

Q. Is the new guild master looking for her?  This is an 'Odds' question and it's 'Likely' that he is, so we'll roll against the right hand column of the Fate Chart.  Setting the Difficulty Rank, well it's an unopposed action, so it's 'Average'.  Cross referencing it on the chart it's 85% likely that he is looking for her.  I rolled a 31, yes he is.

Q. Does he find her?  Another odds question, it's unlikely that a small band can find any particular individual in a small city at night.  However this is an opposed check, against her 'Hide in Shadows' skill, which I'm using as a proxy for her ability to skulk about town.  A first level thief has only 10% in Hide in Shadows, that's 'Weak'.  The cross reference this time is 75% chance that she's found.  I rolled a 33 - that's a double and it's below the Chaos Factor.  A Random Event has occurred.

On the Event Focus table it comes up as a Remote Event, not something directly concerning the action in this scene.  I decide that it effects one of the NPCs and randomly selected one of the town councilors.  The first thing that comes to mind is that there's been an assassination attempt and the alarm is beginning to sound.


Back to the action.  The roll wasn't an Exceptional Yes, so I decided that she's been found by a low level member of the rival gang.  (Imitating Batman) To the NPC Generator!  It's Alkemachos, with his white hair and pock marked face.

Flight is better than fight in some cases, she'll try climbing a wall to escape.  With an 85% chance, she rolls a 3, let's see how he does chasing her.  He rolls a 2, even better since I'm treating him as a zero level man at arms, so I'm using the Fate Chart instead of a skill check.  It's a critical success for him, so he didn't just climb up after her, he caught by the ankle halfway up the wall and pulled her down into the alley before she got away.

Fight time, he wins initiative and hits with his club for five points.  Lights out and this scene is over!
Instead of meeting at the tavern, she'll start the next scene as a captive.


The last part of the scene is updating lists and the Chaos Factor.  I have a new NPC, Alkemachos, and I think everyone would agree that this scene ended up way out of control, so the Chaos Factor is going up to six.


After running through that, I like it.  I like it so much I'm going to use it in conjunction with whatever rules I'm DMing under.  It provides a flexible structure and surprising twists that give me just enough detail to run with.