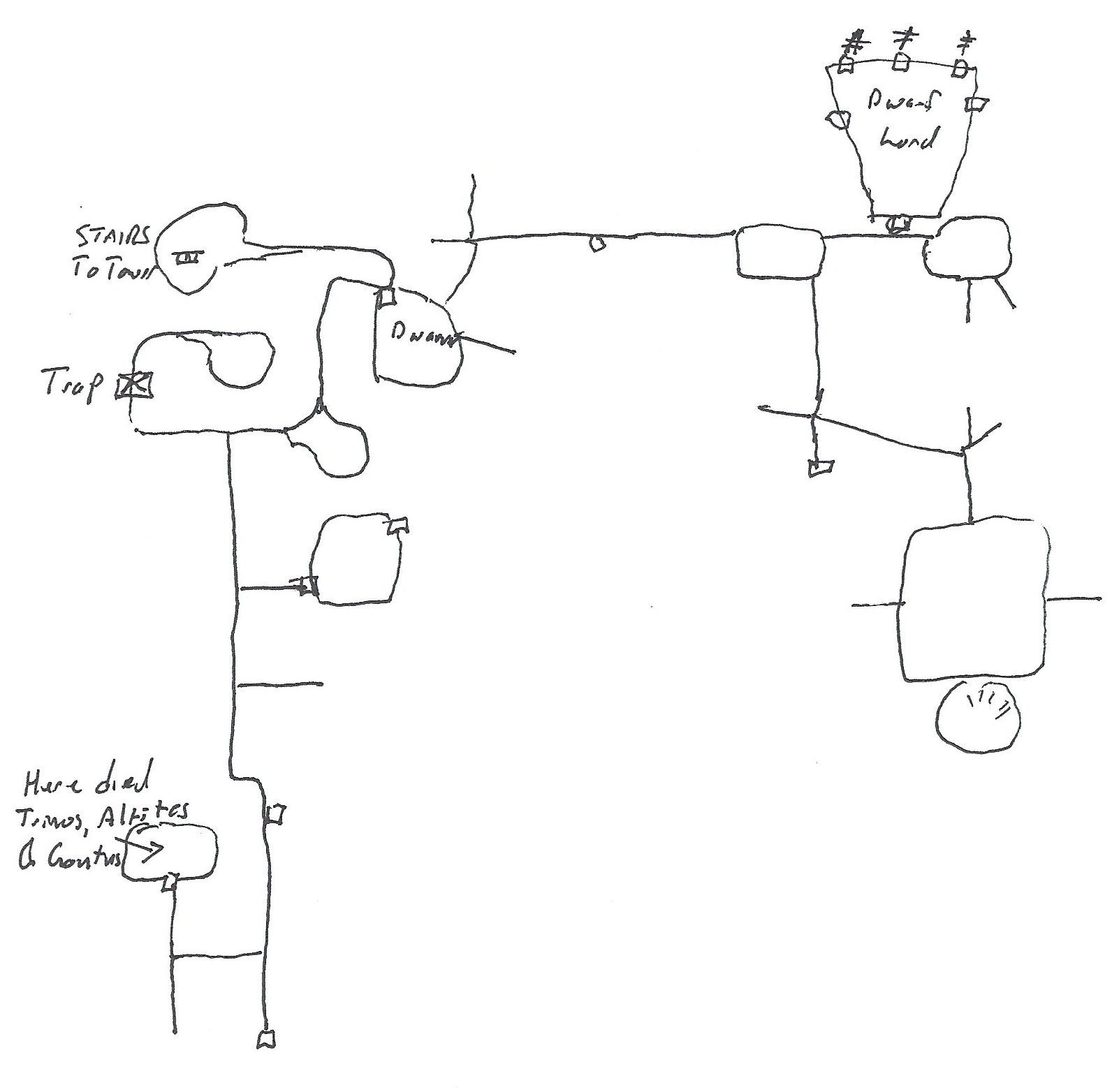 The group stopped in shock as the other three dwarves aimed their crossbows and fired.  The bolts whizzed by their faces and struck with meaty smacks, followed by the howling and yipping of a swarm of kobolds. (Round 1 - Surprise check: Party 1, Kobolds 1, Dwarves 6 - It makes sense that the dwarves were alert and the party dumbfounded.  But it looks like the kobolds were relying on catching the dwarves by surprise.  Three hits on random kobolds for one point each.)  A dozen kobolds and a giant weasel poured into the room past the party, the leading dwarf dropped his crossbow for an axe, killing one kobold and wounding another.  Having Myrphines, Midymnoios and Segestes recognized that the weasel was more dangerous than the whole pack of the little beasts.  Myrphines cast his Magic Missile into it (2 points) while Midymnoios struck with his spear (7 points) and Segestes swung his zweihander (5 points).  Akus and Jumilanas dropped Thekitor's corpse unceremoniously and drew weapons, Akus' quick reflexes allowing him to make a perfect draw cut disemboweling a kobold.  The weasel ignored the blows and fastened on to one of the dwarves, knocking him down and allowing the kobolds to viciously dispatch him,  Other kobolds wounded Myrphines, Akus and the dwarven leader. (Round 2 Initiative Party 5, Kobolds 3; Dwarves 6.  End of round morale checks: Dwarves 7 - Fight On, Kobolds 2 - Run Away!; Weasel 12 - Victory or Death). The cowardly beasts turned to run, but the last dwarven crossbowman, having taken out his axe, chopped two down from behind, while Akus and Jumilanas dispatched others.  The weasel, dropped the corpse it was worrying and caught the throat of the dwarven eader bearing him to the ground.  (Round 3 Initiative Party 5, Kobolds 5 Dwarves 6.  Kobolds are already running, so no morale check for the dwarves even after they go down to 50% strength.)  The dwarf who had been ringing the gong strode forward and buried his axe in the weasel's head as the remaining kobolds disappeared from sight.  Myrphines immediately dropped down to tend to the dwarven leader, who had been gashed by the weasel's teeth and his face was bleeding from it;s claws.  (Round 4 Initiative Party 2, Weasel 4; Dwarves 6.  Mortal Wounds for dwaven leader d20: 10-3 & d6 5.  Lost an eye and needs healing magic in one turn.)  The body of the first dwarf lay in a spreading pool of blood on the floor, obviously beyond all but the most potent of healing magic. (Mortal Wounds d20: 5-8 = -3 & d6: 2 - Bloody mess)

The sound of running boots on flagstones reverberated in the room as a another group of dwarves, led by one in brigandine and carrying a hammer, rushed in from another passage,.  Shouting in dwarvish, the leader directed the dwarves to secure the door, then watched as Midymnoios knelt beside the wounded dwarf, divine energy surging from his hands into the fallen dwarf.

The dwarf with the hammer, surveyed the scene, questioning the surviving guards in the gutteral dwarven tongue.  Pointing several times to Thekitor's body, he was obvioulsy asking questions and getting a description of what had occurred.  Finnaly he pointed at the bodies of the slain dwarves and had his followers pick them up.  As they were doing it, he turned to the oarty and curtly said "Come with us."  Then lead the group out of the northeast entry and then east down a long passgae ending at a guarded doorr.  One of the guards, opened the door and made a short announcement to those inside.  Entering the party beheld a large hall with carven pillars and a high arched ceiling.  Gold gleamed from large chests, but their attention was held not by the guards and bears but by the dwarf seated behind a plain desk, counting treasure.  The dwarf with the hammer, walked up to the desk and bowed, then spoke in rapid dwarvish for a short time, occasionally augmented with statements by the wounded guard leader.

The dwarf behind the desk nodded, turned to the party and in excellent Greek said.  "I am Bloodaxe, lord of these halls.  Hildling has recounted what occurred in the western guard room, but that does not explain what happened to our clansman", pointing at Thekitor's body.

Midymnoiois stood forward, "Lord of stone, our companion was chance met when we were sett upon by vermin in the town."  Holding up his mangled hand, "Without his assistance, I would not be here to recount the tale."  Gesturing to Segetes,  " Later he joined us in defeating another group of the scaly beasts that infest this place and cost my comrade his eye.  He stayed with us, when we found that bandits infested the upper ruins as the scaly beasts do below.  He led us in cleaning them out, but a foul trick, a poisoned needle in a lock pricked him.  He died in my arms, as I wept, unable to save him.  He charged me to return his body to you via the western door, the only entrance that we knew to your halls."

"I knew of the beginning, but not the end of the tale.  But often this happens to those who stray beyond our halls.  Still, you have kept faith with one of our clan and the clan shall keep faith with you."  "What brings you to these halls, the lure of riches?"  Gesturing at three iron gates at the end of the hall, he continued "We control the access to the lower levels and can provide healing."  "At better rates than we charge to others in whom we have no faith."

Myrphines stirred, but before he could speak the paladin responded "Great lord, what brought us here isn't important.  Now we burn to slay those foul serpent dogs and shall return to hunt them!"  Segestes nodded fervently at this statement.

"Then remember our offer of healing when you needed it and you shall be welcome in these halls for a respite."

Hildling then led them down a series of passages to another hall, this one painted and defaced, Pointing to a door at the far end he told them that it led to a stairway that went up to the surface as well as down to other levels.  The group took their leave and departed to their lodgings in Scodra.