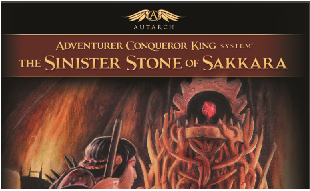 The Sinister Stone of Sakkara is Autarch's first adventure module.  It's set in their default Auran Empire campaign and integrates with all of their existing products - Adventurer Conquer King and Domains at War.
The module itself comes in at 82 pages, including some Old School-esque cartography (the large scale maps reminded me of a sort of cross between Hommlet and Panzer Blitz), gridded layouts of every building in the fort as well as the dungeon and a couple of stunning full color illustrations.  Overall the art work is top notch.
The module starts with the background of the area, a thumbnail sketch for the more distant past and a detailed reasoning for why the fort is currently under strength and hiring adventurers.  Each room and building in the fort, as well as the local inn, are meticulously detailed and drawn on a grid.  Even the latrines are detailed.  The overall fort and it's environs rates a large scale (55ft) hex grid.  This section includes stat blocks for minor NPCs inline with the text.  This section ends with the table of regional trade modifiers and a stat block of the domain as a whole.
The next short section details ten important NPCs who may function as patrons, allies or opponents as the characters move through the module.  That takes us about half way through the booklet, but it as intended, it provides enough detail for a party to use the fort as a base of operations, and possibly even take it over as their own domain through course of play.
The adventure itself starts with a short hexcrawl.  While the dungeon location isn't known to the plyers or NPCs,  liberal tracking rules and a short list of potential random encounters will allow most parties to find the dungeon in the first couple of days of exploration.
The dungeon itself is very old school, as in 'Let's take a sheet of graph paper and seen how many rooms we can get on one level'.  With the large number of rooms the designers were able to fit in a number of factions competing with each other for the boss' favor.  The writeups for each faction gives their relationships to each other and what the cost of a non-combat encounter will be for the party.  The first level is very well put together, providing as many opportunities for role playing as for combat.
The second level has fewer rooms, more dangerous monsters and more of a creepy feeling with the presence of slimes, jellies and flesh altering mutations.  This is the home of the boss as well as the fount of evil blighting the area.
The module ends with some notes about other places in the sandbox for aspiring adventurers to play and with a set of pre-gen characters.
The adventure is geared for starting characters, and if you're coming from the more recent editions of D&D, you'll be shocked at how under powered the NPCs seem to be.  But that's part of the charm of ACKS for me, not everyone is a superhero.  I can see a the players experiencing a TPK within the dungeon; I can also see them fast taking their way into a romp behind some of the NPCs - of course they wouldn't get much experience from that.
The off putting:  Some of the side bars showing how it integrates with Domains at War break up the flow of the adventure.  I don't need calculations showing how the stable holds enough hay for 60 horses at so much gold and oh, by the way that's exactly the maintenance cost for sixty cavalry in Domains at War.  It's good to point out that it meshes seamlessly with Domains at War, but one note to that effect would have been enough.  A page of tables so you can randomly generate every dish at a decadent  banquet - why?  The "1980's Sex, Drugs and Metal Memorial Rule" under the somewhat NSFW illustration, I just don't see the connection (with the 80's that is.  The rule and the illustration go together).  Some campaign setting information is referenced without any explanation - like "The dwarves of Azen Radohk".  Where is Azen Radohk, how does it relate to the sandbox?
The good - A solid adventure with a well constructed dungeon, with a great starting base for a campaign is worth the investment.  The module can be moved to another Late Classical though Medieval setting without much effort, it's not tied too heavily to the Auran Empire campaign.The inclusion of the Character Motivation table to give the players a hook for role playing their characters is something I don't remember encountering before.  It's definitely an idea worth stealing.  And did I mention the illustrations, breath taking, evocative and always useful.


Will I run the module?  Maybe, that would involve getting the band back together, they might not want to invest in a rule book for a one shot  and I don't have time or energy currently to run a campaign.