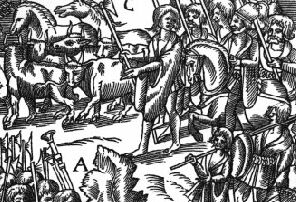 Knelt over young Wili  / The cattle are stolen!
Recovered they must / Or great hunger stalks us

Deeds must be sung / Even in battles so humble
Our Dancer of Wrath / Skewers two with one blow!

Watseka the Scarred / She of the Power
Slew the leader with darts / Another with staff
The last melted away / Under her witch-fire!

Setup Using Adventurer Conqueror King to run a group through the
Wilderlands, based out of the City State of the Invincible Overlord.  The
initial action is driven by an NPC - Miortus, a priest of Arghrasmak, the
Gargoyle God. He is researching Carcosan rituals to bind or imprison
his god and bend the god to his will, making him the master of the temple.
None of which is known by the PC’s; they have agreed to take a sealed
box to the town of Anvil and return with the priest Fladhal’s response.


Diary of Sydney Harcurt
Note: Month names are from the Commoner's Calendar in City State
of the Invincible Overlord. Names of the day are from Ancient Athens lunar
calendar.
Portly Pomp. 8th waning  Met with the employer Tlichnolli’s cousin had
set up for us at the Bloody Foam (what a dump).  Turned out to be Moitus,
a priest of the temple across the street. He wants us to deliver a box to
another priest up in Anvil.  Perpetua turned into a little prig, almost
queered the deal for us. She wants us to detour to Byrny to get the blessing
of some senior priestess, at least it’s not far off our road.  Took us hours to
get over to the Grand Gate, the merchant quarter was packed. Then some
constables shook us down, said they were looking for a shield stolen from
Hellbridge. I feel sorry for any idiots who stole from that bunch.  We’re
spending the night at the Crab. Earned 2 silver

Portly Pomp, 7th waning Watseka was attacked by a horned serpent just
outside of Darkfield, her face is horribly burned.  I thought it might be a
basilisk, but the farmers went out to look and told us it was a snake they
call a “Horned Spitter”.  Brought in 7 silver

Portly Pomp, 6th waning  Staying at the Bottle and Grimoire, Watseka is
resting.

Portly Pomp, 5th waning  Her face isn’t healing well.  Snarzak the Stern
came by and gave us 20 gold for killing the serpent before it preyed on
any of the villagers.

Portly Pomp, 4th waning  She’s still not better.  Went out this morning and
saw that a house near the wall was damaged by a rock last night.  Asking
around, I heard that it belongs to Durmnos the painter, who refused to do
some work for a giant.

Portly Pomp, 3rd waning  She’s up and around, but her left ear is ragged
and her face is scabbed over.  We decided to leave in the morning, we should
be able to get past Haghill, maybe all the way to the ford on the Eorlbane.
Earned 3 silver

Portly Pomp, 2nd waning Long walk through the hills, but made it to the ford.

Portly Pomp, Old & New Walked through the moors, no sign of the
Moonrakers or the famous Roc said to hunt the moors.  Camped east of the
Moorwood, too dark to start through. Looks like Watseka’s face will be scarred
forever.

Yellow Moon-Dog, New Through the wood and back into the hills.  Spending
the night at Haldon’s farm. Warm, if fragrant in the hayloft over the oxen, but a
good meal in exchange for a couple of the epics.  We should reach Rorystone
Vale tomorrow.


Yellow Moon-Dog, 2nd rising We were just leaving Haldon’s, when we heard
a commotion.  We found Haldon standing over Wili the cowherd; a group of
seven goblins had ambushed him and were stealing the oxen.  We managed
to kill the goblins; Watseka killed four of them by herself, two without any
magic!
Tlichnolli and I are pretty banged up, so we’re staying here a couple of days,
that will give Perpetua a chance to say prayers over Wili’s grave.
Rod Thompson at 8:59 PM
Share