Creating a Dungeon with the Tome of Adventure Design - Part I

I've come across references to the Tome of Adventure Design a few times in reading various blogs and MeWe posts.  It arrived on my doorstep on Monday, 300+ pages of random tables covering more aspects of campaign and adventure design than I have had a chance to digest.  Definitely a five skull product.

As I'm at a bit of a block with  my current Call of Cthulhu adventure, I decided to amuse myself by using the Tome to design a moderately sized dungeon.  Rather as the Castle Triskelion site is doing for a megadungeon since the G+ days (he's been on a short break since December 2018).   I'll generate the rooms individually, then go back and edit them as further rooms give me more ideas and to fit whatever area configuration I put them in.   (I'm in IT, iterative design provides better results than waterfall.)

One of the excellent suggestions in the Tome is to design dungeons by areas - connected blocks of rooms with transition connections between them.  They also provide random configuration suggestions for linking corridors, rather than random corridor generation which has been a jarring note to me since the AD&D DMG.  There's no natural way for the dungeon to be complete with those.  I decided on a modest three area dungeon, which I quickly determined to be Area 1 - 14 rooms, Area 2 - 3 rooms and Area 3 - 14 rooms (Table 3-38).  When I went to consider where to start, well I haven't found a table for dungeon entries, so I decided to start with an What Comes Next (Table 3-78).

Entering the dungeon, the party enters a 50 by 50 foot room, in a stepped triangle shape, a ten foot opening on the far side can be seen to lead into another large area.  The body of a gigantic snake, obviously dead, lies on the floor.

What Comes Next - Room with Dramatic Architecture (3-57) and two items of Dungeon Dressing (3-144).  Decided that it should be a Room of Unusual Size (Table 3-40), which gave me the hourglass and it's size.

The far side of the room is a mirror image of the first, making the whole room a 50x100 foot stepped hourglass.  A carved frieze adorns the far wall around the exit. 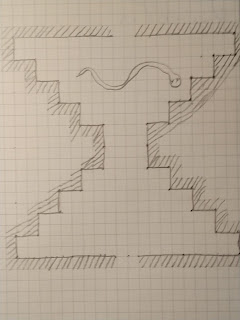 The snake was killed by edged weapons, most of the wounds have been stitched up for some reason.  One wound is only partially sewn with the needle and thread hanging off the corpse.

The frieze on the far wall is of two figures meeting on a bridge to duel.  The right hand figure is a female human in chain mail with lifelike features, she carries a spear and shield.  The left hand warrior appears not to have been finished, as it's only a rough humanoid shape.

Dramatic Architecture (Table 3-57) gave me "Walls" and how it is dramatic is "Effect on Viewer".  I decided a frieze would be an appropriate, durable dramatic element on a wall, went to the Statues table (3-75 and generated Battle scene ("Bridge").

The first character to state they are examining the frieze must make a save vs Magic (Will).  If they save nothing happens, if they fail their companions see them appear to get sucked bodily into the frieze, like a genie back into it's bottle, and the left hand figure takes on their detailed features.

The right hand figure will advance to attack the character, the character has one round before they are in melee.  (The party will see the carven characters moving as they duel.) The character cannot leave the bridge, they must conquer or die.  The only way for the party to intervene is to attempt to destroy the right hand carving as it moves across the frieze.  It's stone and can only be affected as such.  Not that damaging the frieze, by say hammering it, has a 50% chance of damaging the carving of the character too.

Didn't find a table to elaborate on the "Effect on Viewer", but had the idea that a viewer could be drawn in to the scene, like into a Mirror of Life Trapping.  It's a battle scene, so the fight was an obvious consequence.  But I wanted a reward for victory, so I poked around until I found the Benefits and Curses Table (3-121) and gave it a roll that suggested an immunity effect.

If the character wins, their body pours out as the carvings reset.  They now bear a round, mirrored shield, covered with a multitude of circular dents.

Don't remember how I got the idea for becoming immune to gaze attacks, but decided a reflective shield as the reward.   Once I had it, allowing it some effectiveness against the smaller rays seemed like a good idea.  And then the idea of having the reflections go in semi-random direction made me think of a shield with lots of small dents, like craters on the moon.  When I got to the name, Moon Shield, I KNEW it had to have something of an effect on lycanthropes.  And finally, it gave me the idea of tying it's use to a Lunar time period, figured a year was better than just a month or the next phase of the moon.