3rd Edition, where the OSR took it's own course, thanks, I think, to the Open Game License.  Really don't know it was probably eight or ten years afterwards before I became of the OSR and people were squabbling over who invented it.

Lots of baggage was jettisoned in 3rd Edition THAC0 and the odd saving throw categories from the beginnings.  Lots of complexity was added, skills and feats and challenge ratings.  The first two led to the rise of the min/maxers, who always seemed to me to mistake winning for playing the game. 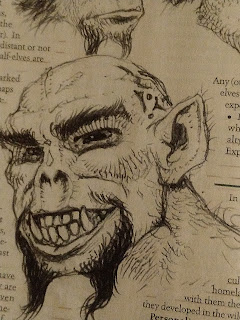 Auburn hair, emerald green skin and blue eyes demonstrate his orc and Skandik heritage.  Surprisingly focused for a cross between an orc and a sea raider, he looks to make his fortune in the City State ... at someone else's expense.