A New Paradigm for Random Encounters 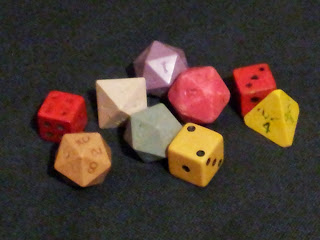 I've done a couple of random encounter tables this year, where I have taken results from many different systems and created selections for specific localities in the Wilderlands.  In doing so I have used a straight d20 paradigm, giving each monster a 5% chance of appearing.  While I've accepted this, I have also felt that a linear progression isn't right and even a regular Bell Curve is problematical at times - such as when a Star Spawn of Cthulhu has a 5% chance of doing a TPK just by showing up.  Once monsters get tough enough, any Dungeon Master who strives for what's been termed 'Gygaxian Naturalism', has to ask, how do normal people survive when such threats are walking around.

Late in November 2020, Goblin's Henchman over on MeWe shared a post where he discussed using non-homogenous random tables, based on distance from a town to determine what monsters may show up.  The idea is pretty simple create a random encounter table, set your weaker monsters in the lower range, say 2-12 where you can  use smaller dice to generate the curve.  As you move away from civilization, add tougher monsters and increase the size of the dice you roll.

A simple table compares the probability of any combination being rolled by two of the standard gaming dies.  Looking at any line, for example rolling a 5 - shows how the probability falls off precipitously as the size of the die increases; going from 25% when rolling 2d4 down to a mere 1% when rolling two d20.
I was going to stop at 2d20, but when I started crunching numbers, I realized that 2d20 wasn't going to drop the probabilities enough - so I added the 2d100 progression also.  THEN I realized that was too long AND it STILL didn't give me the progression I wanted (see below), so I added 3d10 and 4d10 columns.

The first change to my approach to building the random encounter tables is that I now need to categorize the encounters by strength.  I have five rather broad categories in mind.  (1) Local inhabitants, farmer, merchants etc.  not usually combat threat but may have information of adventure hooks for the characters, (2) weak monsters - arbitrarily I'll say 1-3 hit dice; I'll need to tailor the definition for Runequest and other such non-leveling systems - I think.  If you're looking for an example, I'm thinking anything weaker than an ogre, as one ogre can put some hurt a party of 1st level characters. (3) middling monsters - say 4-8 hit dice, (4) strong monsters - of 9-15 HD and Oh My God, We're Doomed! monsters of 16+ hit dice.
Taking those categories and adding in some desired frequency by range data produces this matrix.  (I'm thinking of the Wilderlands 5 mile hexes, would also work for ACKS 6 mile hexes.  Would change the range buckets if using 10 or 15 mile hexes; if you're using D&D 30 mile campaign hexes, go straight to the 4+ Hex column.)
Thinking about it, probably just use the 2 and 4+ Hexes ranges for waterborne encounters to simulate the increased covert mobility of water creatures compared to land creatures.

Playing around with a spreadsheet for several day led me to this distribution of encounters in a single table.  I used examples from the last Random Encounter table I constructed.
With this distribution, I could check the probabilities generated by various combinations of die rolls and find the ones that fit my desired distribution the best.
I could play with the encounter category distribution and try to refine it further, but I think I've dialed it in enough for this exercise.

I don't know if I'll use this when I construct random encounter tables in the future.  The idea sounds good, but in practice you need tables that allow you to roll for monsters of specific strengths.  D&D has done that for dungeons since the beginning, but not for hex crawls.  When I add in my favored way of adding whimsy by combining results from every game system on my shelves - well that would be a project in and of itself to create a set of master encounter lists.
The other thing I don't like about this approach is the players will learn the numbers to run from and the numbers to ignore.  Such meta-game knowledge I think would lessen the immersion of the players in the game, as they will react differently how their characters would.  After all if the player knows the rustling in the bushes is a wood cutter or shepherd or such, the they lose the mystery and excitement that this time it might be the Blatant Beast come to hear the epic poem it tasked them to create the last time they encountered it.
Your thoughts?
Posted by Rod Thompson at 9:41 PM