RIP Leonard Nimoy.  Here's a link to to Leonard singing the Ballad of Bilbo Baggins
Posted by Rod Thompson at 2:01 PM 1 comment:

Email ThisBlogThis!Share to TwitterShare to FacebookShare to Pinterest
Labels: Misc 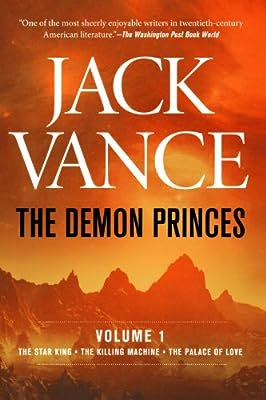 Been out of socket most of this month, between a cruise in the warm and a convention in Lost Wages, which wraps up tomorrow. In my travels, I've read through all five volumes of Jack Vance's Demon Princes.  These are tales of revenge set in the far future, Vance gives us tantalizing glimpses his future. The 26 planets of the Tiger Concourse, and the humorous back story on how they were named.  The workings of the ICC and the Institute, private organizations of vast influence. The Star Kings, a mysterious race of ultra competitive reptilian who may or may not have uplifted mankind.
Yet in the end, we have hundreds of pages of vignettes, the first of the villainous Demon Princes, criminals of shocking callousness and depravity, is a Star King. After its demise, the Star Kings are erased from the universe, never to appear again.  So too the hero's love interest du jour. End of book, end of story arc, even when the hero has taken financial responsibility for them. Poof, gone, lost in the vast cosmos.
By my count, only two characters appear on more than one story, other than the hero.  And little is done to develop any of them, including the hero. Who ticks away tracking down and assassinating these criminals one by one.  His deeds unnoticed by the galaxy and unnoticed by the remaining criminals.
It's a great, fertile setting for a space opera, read the books. Discover Smade's Planet, the Oikumene and the lawless beyond.  Have the characters s each for ore among the Darshan on Dar Sai, and let them determine if the climate is more pitiless than the people. Let them journey to far, forgotten Thamber at the edge of the galaxy or take their old Model 9B located ship to search for new worlds.
But the stories themselves, meh.

Posted by Rod Thompson at 11:00 PM No comments: