The Nine Virtues of Magnus the Pious is a Warhammer  Fantasy Role Play introductory module, I believe for the second edition.  I know that the stat blocks don't quite match up with the first edition.  As soon as I read through it it I knew that I was going to run it.  It's not your typical dungeon crawl, instead it's a MacGuffin hunt set in the midst of a city being sacked.

In format, it's a copiously and sometimes inaccurately illustrated forty two page PDF.  The first ten pages are illustrations and backstory.  As most of it is irrelevant to the players or the plot, I used it for inspiration and freely changed details to make it fit in with my campaign.

Despite the fact that it has a whole city to play in there are only three set encounters outside of the building where the MacGuffin is held.  The city is divided into four parts:
The western bank of the river Wolfen, which is held by the defenders;
'No-Man's Land' - those parts of the eastern bank visible to the defenders where the party can be attacked by BOTH sides.
'Altered States' - those parts of the city devastated by the magical attack that leveled the city walls
'Utter Mayhem' - everywhere else in the city. 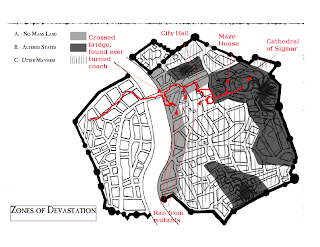 No details are provided for the western bank, the plot quickly rushes the players across the river.

Each type of the area on the east bank has a short list of random encounters, with a 60% chance pf encounter every ten minutes.  I thought that would be far too small of a selection, but in play it turned out that no random encounter was ever repeated.

The action is divided into two scenes to use the Mythic terminology: getting to the City Hall and finding the MacGuffin inside the building.  There's a climactic fight on the roof before the party exits via a balloon.

The motivations for the two main NPC's are what makes this module so much fun to run.  The adventure starts off with the party trapped in the doomed city and drafted into it's last desperate defense against the horde of mutant Chaos worshipping barbarians.  Their sergeant volunteers them to assist a nun in recovering a Holy Relic from the other side of the river.  Except she's not a real nun she's a cat burglar who's been truing to steal the relic and sees her chance in current situation.  And the sergeant is actually her accomplice. So the party is being used as dupes and meatshields to begin with.

Even better as the horde gathers outside the City Hall, effectively trapping the party, the cat burglar/nun leads the way to the roof where her accomplices are waiting in a balloon to lift the party to safety.

Except the accomplices have decided to double-cross her.

Play report below the jump.


As I mentioned in an earlier post, I started running a new campaign with my usual group, plus one of their daughters.  We are still using Pathfinder for the mechanics, but I'm cobbling together things from multiple systems, especially including the Fate Roles from Mythic and convertingWarhammer Fantasy Roleplay scenarios.

Our heroes start out in a warehouse, hastily converted into a barracks, near the gate.  The situation is dire, the city of Wolfenburg, capital of Ostland, has been attacked by a horde of mutant Kurgens (Mongol analogues) and most of it has been captured.  All that remains is the smaller unshaded area of the map.  The party has been drafted into the defense of the city along with all other semi-able bodied people available.  The Elector-Count Valmir von Raukov has fled down river 'to get help' and the mercenaries are deserting.
Into this pit of despair walks Sergeant Harold Zeeman with an insane solider over his shoulder, the sole survivor of the deserting mercenaries (who is madly giggling "they just want the soft bits, but they won't get my eyes" as he's dumped in the corner).  Sergeant Zeeman is looking for volunteers to help Sister Krimhelda recover an artifact with which she can perform a rite and repel the invaders [ed. - This is a change from the back story].  He chooses the two humans and the dwarf - and then reluctantly includes "the Pointies" (elves) in the party to accompany the good sister to the City Hall where the artifact is stored.

After a quick discussion of what would be the best time for the raid, the action moved for them to debouch from a maintenance tunnel under the bridge.  There they encountered an over turned coach with the Elcto-Count's coat of arms.  The elven wizard/thief went into the coach and did a quick detect magic.  He found a sword, and a fancy mundane helm and cloak along with a chest containing a lot of gold.  About this time the defender's cannon opened up on them, thinking that they were some of the attackers.  The first shot demolished the entrance to the tunnel, trapping them on the east side of the river and causing them to start getting out of the area.  The second shot I rolled extremely well on and hit the coach, showering the ranger with splinters.

The party started heading south and east towards the City Hall, but kept running into large parties of Kurgens which caused them to backtrack to the north and head further east until they finally snuck through a noisome alley at the edge of the square the City Hall fronted.  Unfortunately for them the square itself was full of Kurgens building a large wicker man and stuffing people into it. As some of them started towards the party, they retreated once more - only to find that that other street was now the scene of a battle between two opposing factions (eagle and horse tail clans) of the attackers. Finally they realized that they could sneak THROUGH the buildings too and get to the City Hall.

Once inside City Hall they started searching thoroughly searching the building; high points included calming a warhorse that the module had included inside the main hall for no readily apparent reason; finding the clerk 'Rumus Hildegaard' pretending to be the Burgomeister, fighting some stray Kurgens and Mrs Munchner - a little old lady hobbling untouched through the chaos in the streets to register buying land within the city.  She kept whacking characters on the ankles with her walking stick until they located the Registry Book for her.  I had so much fun with her that she ended up with plot armor a mile thick.

Finally moving to the basement, they encountered the mutated head clerk, who informed them that he couldn't give them the MacGuffin unless they gave him the proper form. One of the players said, 'Hey we've got a clerk!' and they headed upstairs to where they had left Rumpus, who  filled out the form for them.  Allowed into the sub-basement they managed to make friends with Putzi the cowardly leopard, find the Macguffin and a grimoire in the evidence room.

When they got back to the main floor, the square had even more Kurgen's in it massing for the assault on the western bank.  'Sister Krimhelda' revealed that she wasn't a nun (they'd never questioned her at all) and offered to let them escape with her via the roof.

On the roof Sergeant Zeeman was waiting in the balloon 'Thunder Dragon', but he had decided to double cross them and wanted the MacGuffin..  Negotiations quickly broke down and missile fire was exchanged, oddly the entire party concentrated on shooting Zeeman (usually the players spread their fire) - along with a couple of the crew failing their saving throws vs Color Spray - Zeeman quickly slumped down wounded and ordered the crew to abandon the party on the roof top.

Now the balloon is the officially approved escape from the town, and I figured that the party would reopen negotiations with the survivors of the crew.  Bloody dwarves - John, playing the dwarven magus, had the next action, he carefully checked how far I had said the balloon was from the rooftop - and jumped a Flaming Sphere into it.

The module doesn't give any information on the balloon, but I had decided that the inventor had discovered that a magic item which allowed the user to breathe under water by producing oxygen,  produced hydrogen from the other end and had used that to inflate the balloon.   I'm also a fan of David Weber's Honorverse, which uses hydrogen as a fuel source - and a source for spectacular explosions.  I ruled it was a TPK in a spectacular fireball; but Mike, playing the wizard/thief and a member of the Royal Manticoran Navy, argued that I should use the Hindenburg as the model for a hydrogen fire instead.  I had to agree as I've always disallowed items (such as a dagger on the end of a whip) which won't work in the real world.

Various saving throws were made and failed, the 'nun' dropped the MacGuffin, the surviving crew members bailed out of the balloon's basket as it crashed, scooped up the MacGuffin and ran deeper into the city - away from the massing barbarians.  Quickly followed by the party.

After a confusing encounter with a mansion with doors that lead in a circle and some minor damage to the pursued and pursuers, the party ended up following the trail to the Cathedral of Sigmar - which now looked like a huge skull on the outside.  [ed. - By now I was looking for a means to get them out of the city, and they had charged into one of the most chaotic areas in town] I decided to use Mythic and crowd source the problem, asking the players what they thought they would find when they opened the door.  Not being dummies they said they were sure the bad guys would be stuck right inside the door - making it easy for them to capture them.  While I wasn't terribly happy about the meta gaming, I made the Fate roll and discovered that it was an 'Altered Scene' in  Mythic-speak.  I ruled the pursued crew were visible,  stuck whirling in mid air, under the dome of the cathedral.  The party could not see the underside of the dome itself from outside the doors.  Oddly, the inside of the Cathedral didn't appear to have been changed the way the exterior had.  Eventually they followed the 'nun' inside and discovered that while they could climb up in the whirlwind, they could not climb down.  So they roped themselves together and rode it out - the dwarf (who's play is marrying off a daughter during our next session) was at the end, the rope snapped, sending him off on his own.  They rest of the party ended up on a rocky ledge somewhere high in the air and we ended it at that point.