Been meaning to post these since September.  Anyway, Wolvesey, or Wolf Island castle is in Winchester England within walking distance of the abbey.  It has a fascinating story having been built by the Henry, the bishop of Winchester after he had double-crossed everyone, including his own brother during the civil war known as The Anarchy.  A wonderful period full of opportunities for skulduggery and mischief that will excite any players who like a more political power game. 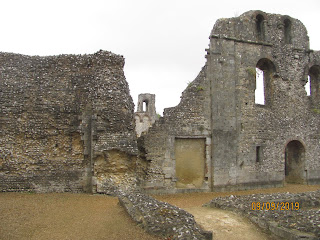 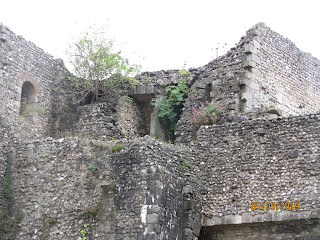 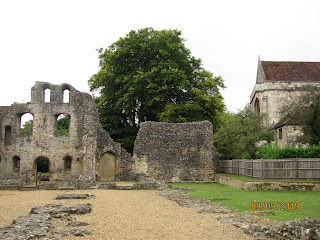 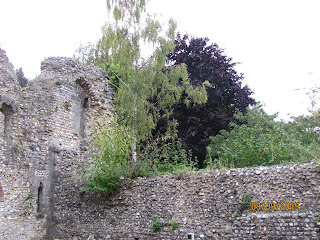 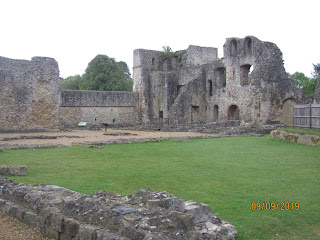 Posted by Rod Thompson at 6:30 PM No comments:

Email ThisBlogThis!Share to TwitterShare to FacebookShare to Pinterest
Labels: Inspirations

I saw this beer coaster recently.  Is it wrong that my mind immediately went to Runequest Tuskers and their riders? 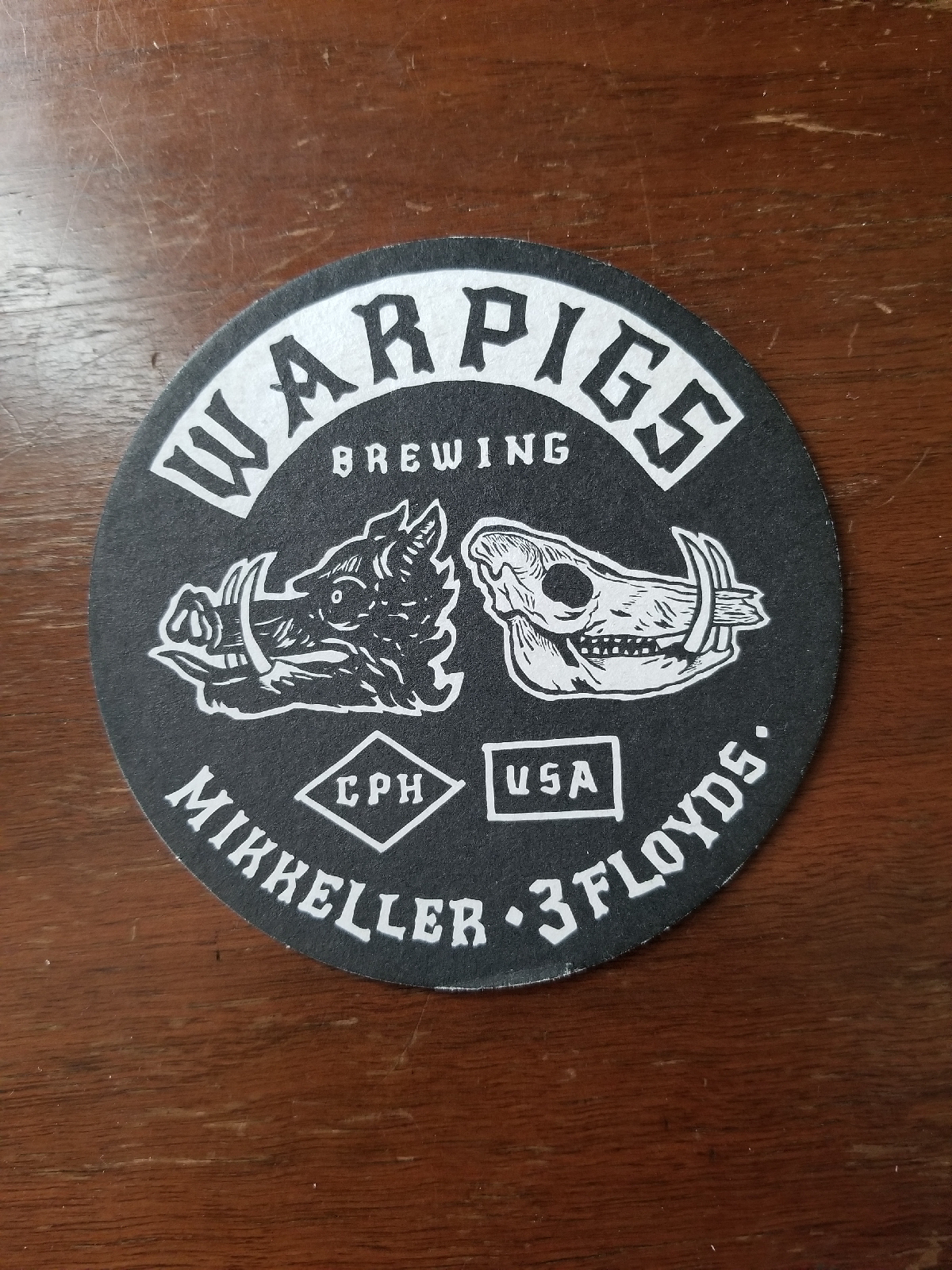 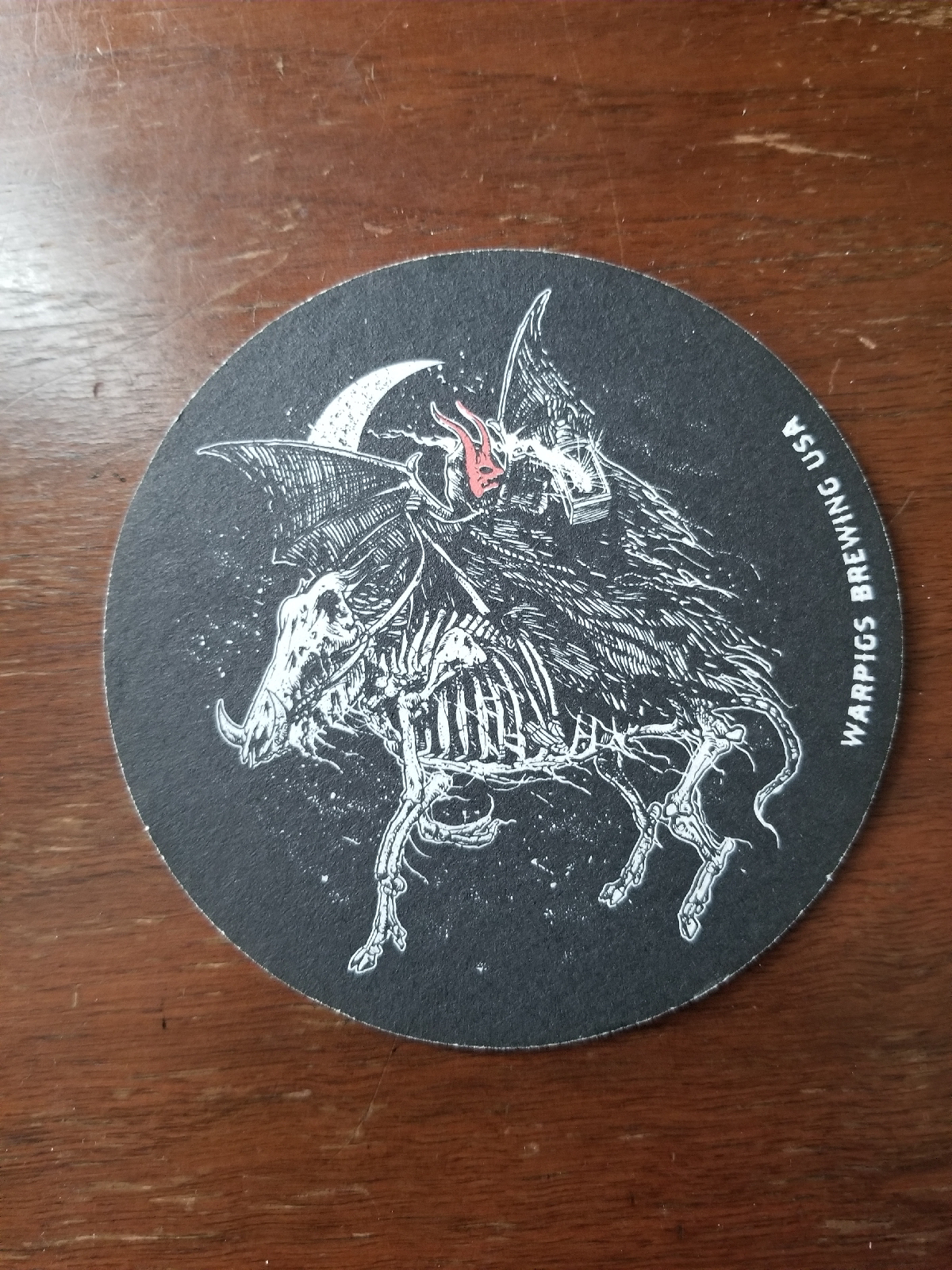 Posted by Rod Thompson at 11:52 AM No comments:

Language Families of the Wilderlands

With my post on Mordacis and languages in Chivalry and Sorcery, I decided to place him in the City State of the Invincible Overlord while running him through advancement as a Magick User.  Based on my previous post and the language rules for Chivalry and Sorcery, this requires me to know the languages and language families in the Wilderlands.
Fortunately, as part of their reboot for d20, around 2003, there is a free download of Judges Guild languages for the Wilderlands settings available via an old Dragonsfoot link.  Unfortunately, it's languages are mostly given as linear descendants, rather than branching trees of related languages the way we view them in the real world.  Also, some of the information appears to contradict the or at least extend the original 1970's material.  With those issues, I decided to use their information to make my own, rather non-canonical, language trees using information form the download, the D&D 3.0 Players Handbook, the original Judges Guild Wilderlands of High Fantasy booklet and my own whims.

Elder Tongue - the original language of the sapient creatures of the Wilderlands, whatever they were.  This language family is hypothesized by sages and the learned, rather than being certain.  While the child languages are treated as unrelated for learning, when reading the Elder Tongue, each child language that is NOT known fluently subtracts 20% from the reader's chance to comprehend the writing. 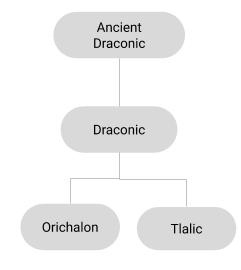 Draconic
Ancient Draconic - the language of the great wyrms who ruled the skies in the youth of the Wilderlands.  This language is believed to be the original language of magic, however it can only be taught by an ancient dragon.

Draconic  -  the language of elderly and younger dragons, spoken in a debased form by kobolds, lizardfolk and such ilk.  The primary language of magic in these lesser days.

Orichalon - Draconic for humanoids, rich in descriptive terms for minerals.  Spoken daily by a few isolated peoples, but used much for writing by Alchemists. 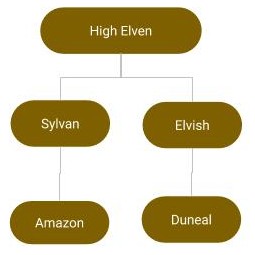 Elvish
High Elven - the speech of the elves who invaded the Wilderlands and stole magic from the dragons.  They also taught the woodland creatures to speak.

Elvish -  the normal speech of the debased elves of modern times.

Sylvan - the simplified version of speech taught by the High Elves to the woodland creatures.

Amazon - as the High Elves taught the Centaurs, so did a group of Centaurs teach some female human foundlings.  These foundlings with their latent psionic talents became the nation of Amazons that rules the southwest.

Duneal - a lesser form of elvish spoken by the foresters of the Duneal Forest near the City State of the Invincible Overlord. 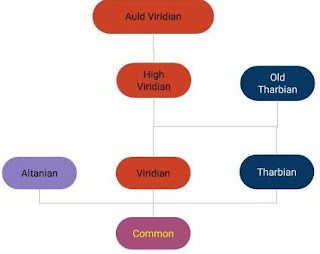 Auld Viridian - still spoken by the remaining Viridians, otherwise restricted to the priests of Armadad Bog.

High Viridian - spoken by noble humans in the lands of the old Viridistan.  This tongue influenced the language of the conquered Tharbians.

Viridian - the language of the commoners of Viridistan, now spread from there south through the desert and Lenape.  Viridian words and a simplified grammar form the foundation of the Common tongue.

Altanian - the language of the barbarians inhabiting the Altanian peninsula, it has contributed as much as 25% of the vocabulary to the Common tongue.

Old Tharbian - the original language of the barbarians roaming the Plateau of Bendigroth and the plains west of the Cloudwall Mountains, who were conquered by the Viridians and the their human henchmen.  No written form.

Tharbian - the language of the remaining barbarians and their cousins the peasants on both sides of the Cloudwall Mountains and Majestic Mountains.    It took the Common alphabet, loan words and case structure from it's Viridian overlords.  One of the progenitors of the Common tongue.

Common - the language of the City State of the Invincible Overlord, spread as a trade language throughout the Wilderlands. 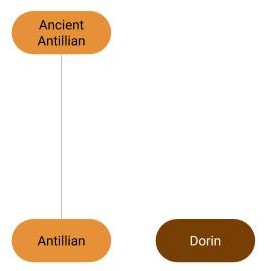 Ancient Antillian - the old speech of the almost vanished civilization of the Altanian peninsula.  A rich vocabulary concerning animals and plants makes this language useful for Druids and Alchemists.

Antillian - the descendant of the Ancient Antillian, this language is spoken only around the faded glories of the city of Antil.  By law, all trading in the city must be written contracts in Antillian, providing a source of income for the multi-lingual Guild of Scribes and Scriveners.

Dorin - the language of the unconquered desert nomads south of Viridistan and ranging into Lenape. 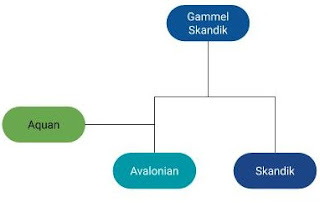 Gammel Skandik - Old Skandik was the unwritten language of the humans of Valon and the Great Glacier.

Avalonian - the language of Valon and it's half-elven wizards after the Aquan speaking Sea Elves conquered and imposed a tribute on the human inhabitants.

Skandik - the tongue of conquerors, the language of the sea raiders who have imposed their rule on the City State of the Invincible Overlord and many of the islands and coasts of the Wilderlands. 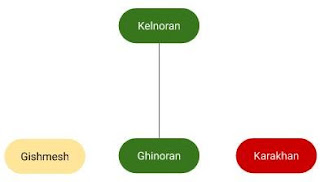 Kelnoran - the ancient predecessor of Ghinoran, many magical texts are believed to be written in this language, however very few magicians have been able to master it enough to decipher them.

Ghinoran - the trade language of the southern seas and coasts.  It is also used as a term to describe the (usually) mutually intelligible dialects, descended from Kelnoran, of the human inhabitants in the area.

Gishmesh  - the tribal language of the founders of Tarantis.  Used as a trade language in the northeastern Wilderlands.

Karakhan the god given language of the city of Karak.  Speakers usually learn Gishmesh as a trade language.

Logii
Logii - was an artificial language of mathematics used to describe the physical world by the long vanquished Philosophers.  It is said certain Dwarf and Gnome clans keep it alive and use it in constructing automatons and machines of great power.

Posted by Rod Thompson at 11:36 AM No comments: 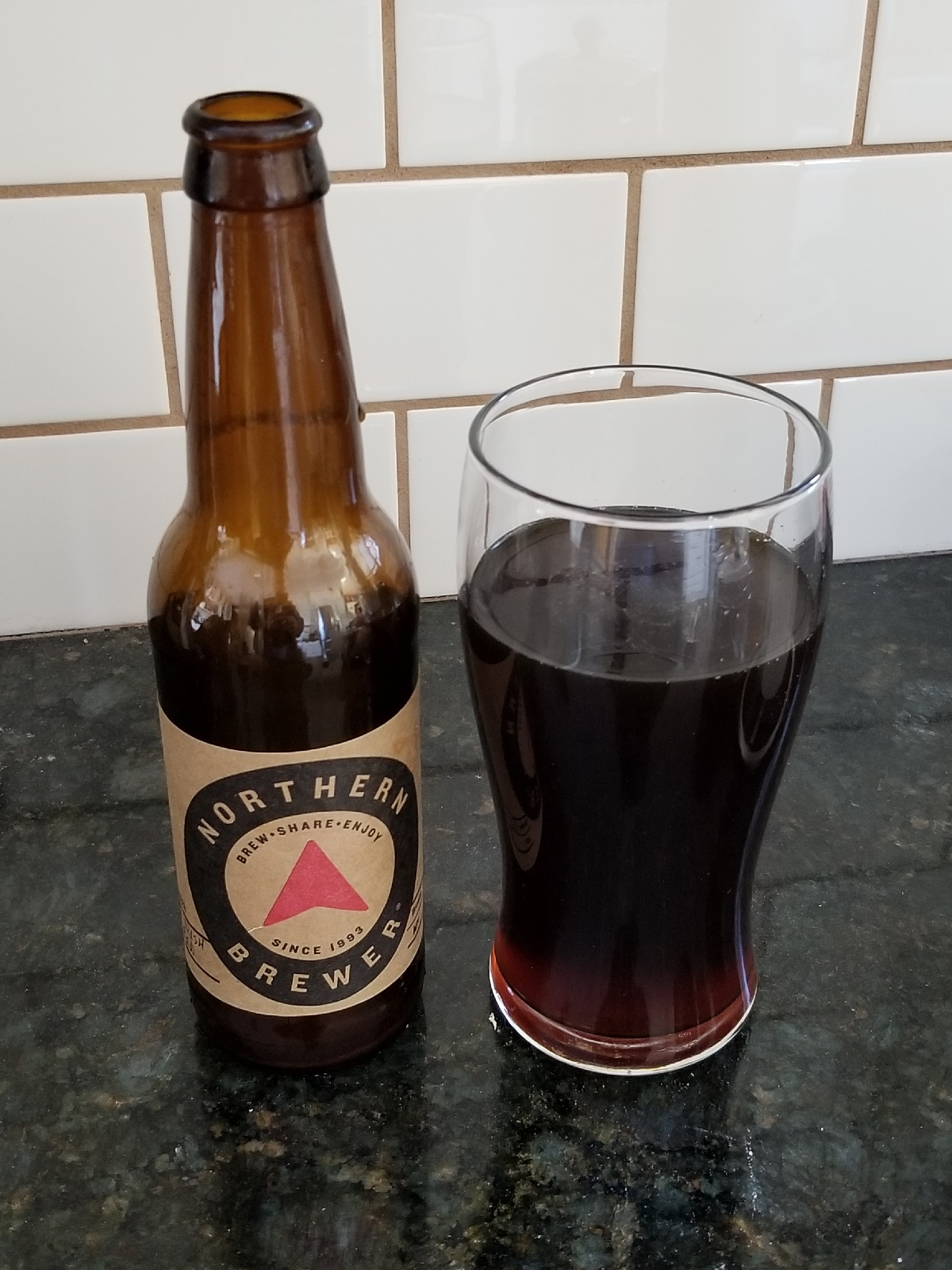 Received a home brewing kit for Christmas and popped the first bottle today.  The beer is the Irish Red Ale kit from Northern Brewers in St Paul, so everything came premeasured, which is fine with me as I learn the steps of brewing.
End result, not bad.  Dark colored, medium body. Tastes like beer, slight note of bitters in the aftertaste. 4.5-5% ABV.
Posted by Rod Thompson at 3:22 PM No comments: