Round up the Usual Suspects! - And how to become one

When faced with the political need to show action, police forces, Night Watches, City Guards, and Constabulary, etc around the multiverse are given the command "Round up the usual suspects!"  Who are these suspects?

They are the habitual criminals and their known associates that the local gendarmes keep tabs on.  While individually they are unlikely to have committed offense in question, they're all guilty of something in the eyes of the watch - if not the judge.  Even if they didn't do it, maybe they know who did it and hate them enough to rat them out.  Plus, they're used to it, so the police can spend some quality time with them, without disturbing the sensibilities of more upstanding citizens.

How does this relate to characters?  Along with being murder-hobos themselves; they, like Fafhrd and the Gray Mouser, tend to associate"with a riff-raff of dubious demons, unfrocked sorcerers and discredited deities." - Fritz Leiber, The Adept's Gambit.  In other words, they are some of the known associates and over time may become Usual Suspects themselves, as the Notoriety increases.

A character starts with zero Notoriety.  Simply a peasant or town kid that the cops and everyone else ignores.  Characters gain Notoriety in the following ways

When the character reaches a Notoriety of 100, they become a Usual Suspect themselves.

Similar to the Law Level in Traveller, the Notoriety score is used to check if the local authorities hassle the character.  Roll d100, if equal to or lower than the character's Notoriety score they get picked up for questioning concerning some incident within the community.  Make these checks whenever background events indicate a suspicious event has occurred or once a month and when trying to leave a walled town.   Questioning will take 1d4-1 days before they are released.

Reduce the score by 1% for each continuous month the character spends outside of a walled community.  Also reduce the score for characters with high social status - it takes a special guardsman to try to bring a duke in for questioning after all.

I'm using the City State of the Invincible Overlord currently and Bob Bledsaw's social system provides an extra layer of crunchiness.  In the JG universe Social Level (SL) ranges from 1-20 within six distinct social hierarchies( 1- Noble, 2 - Gentleman, 3- Military, 4- Guildsmen, 5 - Merchant and 6 - General).  The lowest is SL 1 in the General hierarchy (Slave) and the highest is SL 20 in the Noble hierarchy (any god).

Calculate the Notoriety Level as above, however when checking if the character is hassled by the cops, the roll must be below Notoriety - ((6-Hierarchy) * SL.  The General hierarchy therefore gets no reduction, while a Count in the Noble hierarchy (SL 10) has 50% knocked off the target number.

Example: In my current soloplay, the party was seen receiving a box from an Evil Priest who is a Usual Suspect in the City State.  That raised all of their Notoriety scores to 6.  Since then, the bard has been arrested for Striking a Fool, this raises her Notoriety score to 16.

So the bard will be hassled occasionally, the fighter rarely and the others never.

Posted by Rod Thompson at 7:16 PM No comments:

Drunken Oracle or the Oracle of Alesmiter 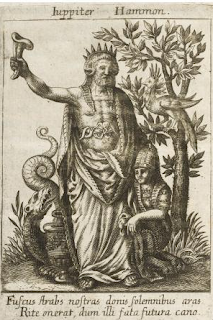 Decided to expand my earlier post to a full blown Oracle. I’ve been using Mythic, so why not keep using their Fate Chart? Can’t read it - the critical success and failure numbers are too small and hard to read. The PDF seems to pixelate when I blow it up and 6, 8 and 0 are hard to tell apart. Besides too many choices.


Add 10% to the roll for every +1 of the character has in the appropriate characteristic.

Abject Failure - Hurt yourself - or others. What you think you know is completely wrong, but you are sure of it.

Partial Success - Maybe the door didn’t open all the way, but it broke enough you can reach in and lift the bar. Or you don’t know what it is, but you know it should be avoided. Maybe you just figured out another approach to the problem that allows you to try again with a +10%.

Critical Success - Whatever the best thing that could happen, happens in spades. That old crone really is the missing princess AND she’s looking to reward the first commoner who treats her kindly.

Of course, roll the dice behind the screen and make up a believable tale when they fail.
Posted by Rod Thompson at 3:01 PM No comments: 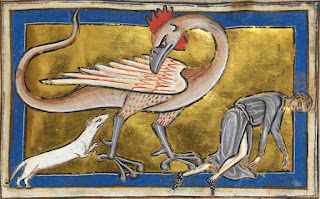 When fighting they use their front claws and gaping maw to kill, then will stop
and eat the pieces if not currently being attacked.  It takes a landshark one
round to eat a small creature, two for a medium and four for a large creature.
Surviving combatants wisely use this time to run away.  When surrounded,
the landshark can jump up to eight feet in the air, allowing them to make two
additional claw attacks with their rear feet.

The landshark is covered with massive armored scales; a prized component
in making magical shields.  It has two vulnerable spots, a small area behind
the crest (AC 7) and the small eyes from the front and sides (AC9).  There is
no penalty for calling a shot against these smaller targets, of the character is
in the right location.

The landshark is known for its ability to burrow underground, often with the
crest breaking through the surface.

Conversion Notes:  One of the iconic monsters and copyrighted; this
conversion is for personal use only.   By straight conversion factor
the AD&D AC values of -2/4/6 convert to 11/3/5. (I convert based
off armor types, using a calculation only when the armor class is off
the charts like the AC-2.  In this instance the Monster Manual describes
the vulnerable spots as being small; so rather than giving characters a
-4 to hit them with a called shot, I increased the AC for the vulnerable
spots by 4.

Posted by Rod Thompson at 3:44 PM No comments:

Does my character know? 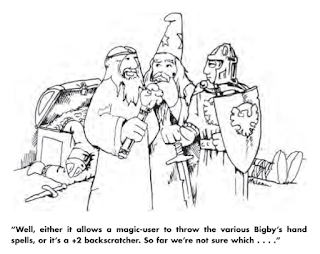 One of the common questions to the DM (and even more pointed when you are solo playing) is what does the character know about the monster, knight at the bridge or political situation in the kingdom.

I’ve been musing on this question a bit  and have devised this simple system based on the Frequency statistic in the AD&D 1e Monster Manual.

Add 10% to the chance to Know the Answer for each point of Intelligence Bonus.

Add 5% to the chance to Know Something Useful for each point of Wisdom Bonus.


What knowledge is considered Common/ Uncommon/ Rare/ Very Rare will vary by campaign, social class, etc and needs to be adjudicated on the fly.


Useful information comes up when the character doesn't know the answer to the question. As in “You don't know what the creature is, but it looks dangerous” or “You don't know how the Burgomiester is getting rich; but you heard a woman in the tavern complain about wagon traffic in the middle of the night.”


Of course, roll the dice behind the screen and make up a believable tale when they fail.

The image is from the Dungeon Masters Guide (Advanced D&D) -copyright TSR Games 1979, and is used to illustrate one of the issues that occurs when playing with those and similar rules.
Posted by Rod Thompson at 3:01 PM No comments: