After the previous exercise in trying to construct a plausible list of languages used in the authors' original medieval European Chivalry and Sorcery campaign,  I'm now looking detailing a systemic way to determine the cost of learning languages that doesn't "assumes that the character is from a country with a Romance, Germanic or Celtic language that uses the Latin alphabet".

There are three factors I will use to determine how hard it is to learn a language, relationship to the character's native language; the alphabet the language is written in and means of expression the native speakers of the language use to communicate.

Relationship - does the language being learned belong to the same family as the character's native language?
For example, my native language is English and when I've studied Norwegian I recognize many root words and sounds, plus the grammar (for example the pronoun structure I/jeg) is very similar.
As a counter example, when I study Latin, while I do recognize many of the words (English being a notorious sponge of "foreign" word imports), most Latin words were not imported so they need to be learned.  Plus the grammar is different, with the pronouns being suffixes attached to the root, rather than separate words.

Alphabet - Once you have learned the symbols and sounds they make, learning to read a different language is a matter of learning which symbols are sounded differently, rather than a whole new system.
Taking Latin again as our example, 'r' is trilled and 'v' is pronounced like an English 'w'.
From my long ago summer of studying Russian, Cyrillic uses a completely different set of symbols that often create sounds that would be combinations of letters in English.  And of course, Semitic languages are notorious for not writing vowels, leaving the meaning of the word up to the context within the document.

Means of Expression - as humans we share a common physical means of communicating.  We can all make sounds in the same ranges that we can hear and use our bodies to gesture to provide additional meaning or even communicate without any sound.
However, not all fantasy races are bipedal humanoids with vocal chords and hearing that matches our human organs.  In Chivalry and Sorcery, the Saurians, including dragons are called out as having extremely difficult languages to learn because of their bodies.  In Runequest, the dragonnewt language requires a human tongue to be physically split in order to approximate it, and I recall that tailed priests (and presumably the Inhuman King) use voluntary body color changes as part of their communication.  In Empire of the Petal Throne, the Pe' Choi language includes making gestures with all four of their arms in normal speech.


* I am not certain about this combination - if the Means of Expression are different, how can it belong to the same family?  The use case I finally decided on is for Creole or Pidgin languages - like a Pidgin Draconic, where the language is altered to be uttered by human vocal cords.  This would then be the cost a dragon would pay to learn it, whereas a human would use the cost for Different Language Family + Same Means of Expression.

Note: I'm using 'Halting' as a synonym for 'Minimal Fluency' from Saurians.

Reading is then dependent on the Language Family and Alphabet.  The cost is for levels of Reading Comprehension.  Poor comprehension allows the reader to pick out individual words and common phrases, maybe work out some additional meanings by context.  Native Reading Comprehension allows the character to read common documents, menus newspapers, wanted posters, etc.  Academic allows the reader to understand the meaning of academic treatises and legal documents couched in unusual terminology or professional jargon.  Magick Reading Comprehension is required to understand the annotation systems commonly used by native speaking Magick Users to indicate pronunciation and associated gestures in that language.

All costs are cumulative, so if you spend 1 Language Point to learn to read poorly, in another level you can spend 2 more language points and learn to read like a Native.  The same holds for learning to Speak a Language.

any written - The character can learn to read any number of languages.

Ability to Read Well - when reading a document, the character must roll this or less on a percentage roll to understand the document.  This assumes that the document is written at the same level as the character's reading comprehension for that language.  The DM should adjust as necessary when the levels are different.  For example, a character who reads at an Academic level should have no trouble reading a menu (although they may not be aware of what some of the dishes are); whereas a character with Poor Reading Comprehension may pick out a couple of words on a scroll written in that language (should he find one), but the inflection marks and gesture notations are just so many blots of ink to them.

Posted by Rod Thompson at 3:25 PM No comments:

I was contacted by a friend of mine this weekend, she asked if I wanted to come over and look through and take anything from her late husband's collection.  Here's what I came away with. 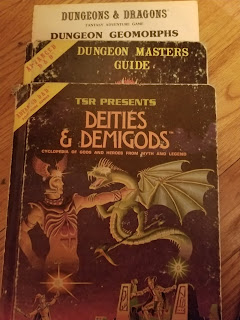 Deities and Demigods - first printing, with Lovecraftian and Melnibonean deities.

DMG - this one is going to my eldest, the squid, for his collection. 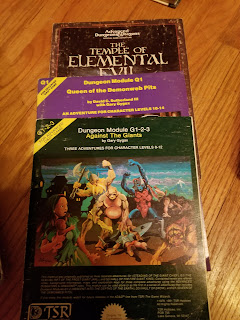 Queen of the Demonweb Pits

Also photo copies of the last two and a photo copy of the Slave Lords.  I know he had an original of those, but it wasn't there. 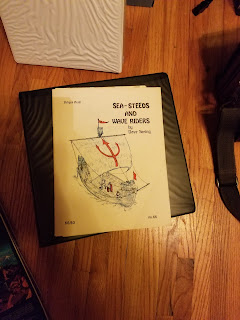 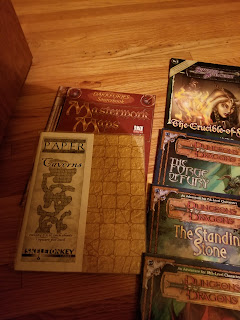 The Forge of Fury

The Crucible of Freya (Sword and Sorcery) 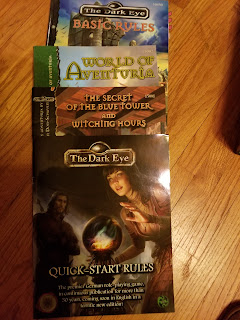 Cucch got these when Atari was working on digital version of the German RPG.

Adventure: The Secret of the Blue Tower and Witching Hours

I remember playing Morrow Project once, back in '80 or '81.  Cucch wasn't the Director though, it was one of the occasional members of our group.  Don't think we got much further than character generation and waking up. 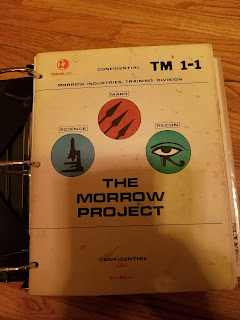 Project File 004 - The Ruins of Chicago

To absent friends - he's rolling with Gary & Dave now, having the time of his afterlife!