This page is home to links to my campaign materials.


Campaign Setting
The setting is a fantastic classical world, set in 605 a.u.c, in the Consulship of Calvus and Servilianus (142 BC). While Rome defeated Carthage four years before, it shares the world with the fantasy races. 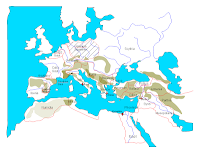 Elves occupy Germania Sagittarius, the area east of the Rhine, extending into Poland and south to the Danube.

Dwarves are mostly from Hispanica Pumilius, the mountainous area south of the Ebro valley, although they have colonies through out the known world. The dwarves supported their traditional ally, Carthage, during the first two Punic wars. Dwarven engineers were credited with improving the roads through the Alps so Hannibal could get his elephants through. Despite this, dwarves have rapidly integrated with Roman society in the last fifty since the conquest of Hispania. Every civic engineering project now includes dwarven participation. For their assistance in the final siege of Carthage, three major dwarven clans have received Roman citizenship and their lords are entitled to seats in the Senate. Every year the Senate names one of them Propraetor Pumilius, with lex subager and executive authority over the dwarven communities in Hispania. In practice, the Propraetor keeps the Romans off of the Low King's back.  An unrelated clan lives in the Miradita area of the mountains, northeast of Apollonia
.
The orcish homeland is believed to be far to the east in the Caucus Mountains, but several hundred years of hiring out as mercenaries find them, and their half-human progeny, everywhere.

Halflings and gnomes are unknown in this campaign.

The current base location is the city of Apollonia in the Epirus Nova (Albania) area of the newly formed Roman province of Macedonia in 142 BC.