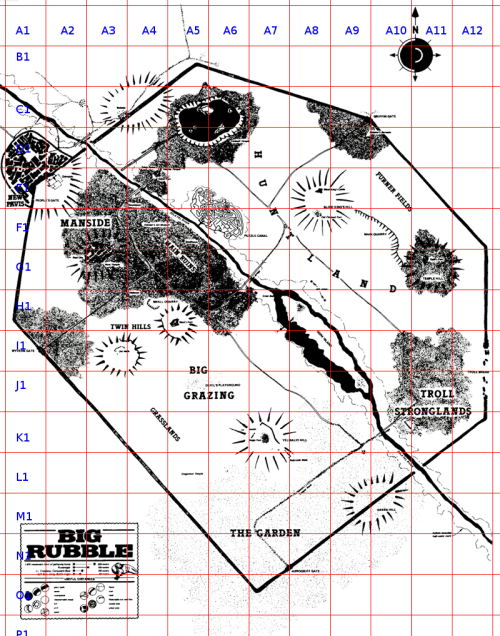 I've been fascinated by the Chaosium RuneQuest Pavis and the Big Rubble setting since I first read the saga of Rurik the Restless in the rule-book. A year or so ago, I went out to DriveThruRPG and bought the PDF version. It's a huge setting, 25km2 of ruined city, now inhabited by trolls, broo and other two and four footed vermin - like adventurers. Sealed off for hundreds of years, it was forceably re-opened by the dragonnewts, then re-colonized by Sartarites, and now conquered by the Lunar Empire. I'm considering setting my next campaign there and wanted to start mapping out the ruins. The small scale map included in the PDF being evocative, but not terribly useful for game play.
The first step was to import an image into GIMP and overlap it with a grid. I started with a hex grid, but as I started drilling down, I realized that a square grid would be easier to use.  I took a screenshot of the PDF page, then in GIMP, I opened the image as Layers, edited out the scale given on the image, created a new 'Grid' layer on top of image layer and then used Filter->Render->Pattern->Grid to draw the lines. I set the distance between the lines at 65 pixels. That gave me a little over 100 half kilometers squares inside the walls. Since the PDF says that the walls contain "about 25km2" of land, that's good enough for my work.  Labeling the top row and left hand column provides me with an easy reference system.

The next step is to be able to drill down to individual buildings.  Again I used GIMP to create a large square, first divided into a 5x5 matrix of smaller squares.  The large square at this scale represents on of the squares on the Pavis map, which I'll refer to as a neighborhood.  The 25 squares inside are 100x100 meter 'blocks".

The final layer is another large square, subdivided into a 10x10 matrix.  The large square represents the 'block' in the neighborhood map and is subdivided into 10m2 'lots'.  Or about 30x30 feet - not coincidentally the size of the house I owned in the Chicago suburbs fifteen years ago.

Next I'll demonstrate drilling down to the building and block level.
Posted by Rod Thompson at 11:33 AM