The Petal Hack is +Brett Slocum 's inspired recasting of the Empire of the Petal Throne (EPT) using the mechanics from the Black Hack.  For those who aren't familiar with it, Empire of the Petal Throne is the original RPG, beating D&D 0e into publication.  Not that it was developed in a vacuum, Gary Gygax and Dave Arneson wrote the forwards to it.
My own introduction to it came just before my 16th birthday when a friend (who had a driver's license) and I saw a notice of a wargaming club being formed at the University of Minnesota, Duluth.  When we showed up that weekend, we were introduced to a large number of SPI and Avalon Hill board games, like Panzer Leader; I lost handily the first time I tried playing Go and I sat in (completely bewildered by the concept) on this pen and paper game where you rolled dice to create a character and then who got killed in the arena.  That was Tekumel, the world of the Petal Throne.  Sadly, I never played again, I was more interested in the tactical wargames that were produced in volume back in the the 70's.  But the idea did inspire me to look for RPGs at the FGS across the state line.  I didn't find EPT, but I picked up Chivalry & Sorcery  at that point.  It wasn't until sometime in the last 10 years or so after I had moved back to the state that I obtained a PDF of the 1987 reprint.  That's when I learned that Professor Barker had been teaching at Minnesota at the same time I attended.  What a missed opportunity!
As to the Petal Hack, it's an outstanding port of the original game system.  Obviously the mechanics have changed, attributes are rolled 3d6 instead or d100 - necessary for implementing the core Black Hack mechanic of rolling under your attribute using a d20.  And it follows from that the combat and magical mechanics have all changed.
The other huge improvement from the original game is the editing is simply smashing in comparison.  It's well organized and concise - I found it more useful for translating terms I found in Professor Barker's novel Man of Gold, than the original manuscript was.
But the mechanics were never the core of EPT.  The game has always been about Professor Barker's World of Tekumel.  A world of the future rotated out of time and space, throne back into barbarism and populated by the descendants of many star faring races and some very hostile indigenous remnants.  All of these have been ported over, along with the wonderful list of techno-magical items like the 'Eye of Joyful Sitting Among Friends', which acts as a Charm Person spell on your enemies and is coincidentally the name of Brett's blog.  And here is where the port is, necessarily I think, weaker - the original rules have lengthy descriptions of each monster, god and magic item, along with a gloss of the thousands of years of history of Tekumel since it was rotated out of the knowledge of man.  The Petal Hack has distilled the monster and item descriptions down to basically one sentence descriptions that capture the essence, but not the flavor.  No evocative mention of chiming and the odor of musty cinnamon indicating the presence of the dreaded Ssu for example.  I suspect this was necessary to keep with in the licensing provisions.
I think this work will be of great interest to anyone who wishes to explore the World of Tekumel, but they will need other resources, such as Brett's blog, the World of Tekumel site and the Tekumel Foundation before they can begin the exploration of  Professor Barker's unique world.
Posted by Rod Thompson at 9:27 AM 2 comments:

My first attempt at building 2.5 dimensional dungeon tiles out of paper and cardboard.  I'm using the PDF images and instructions kindly provided by +Kristian Richards at The Crooked Staff.  I started cutting with a box cutter, but found that using a Dremel rotary cutter works faster, easier and better. Just remember to put scrap wood under it, the blade will go right through any thin plastic cutting board.  I've also switched to a glue stick, instead of a glue gun as it's easier to spread a smooth layer. 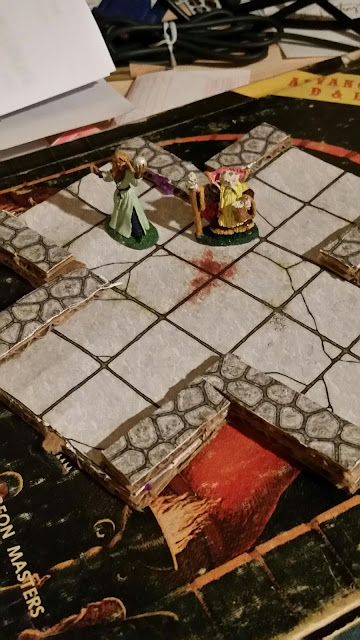 Posted by Rod Thompson at 8:38 PM No comments: