The Changing South
The original treaties between the City State of the World Emperor and the Altanian tribes, copies of which are in the Invincible Overlord's archives, stipulated the Rivers Greyrush and Llobregather along with Queans Waste were the boundary between civilization and what the Virdii saw as barbarism.  Recent generations have seen the border pushed south and the ancient tribal lands of the Altanians given to nobles and adventurers as feudal holdings.  In addition to these changes, the ancient province north of the Llobregather was invaded and then given to the Skandik raiders as a feudal holding to provide a useful navy against other raiders, both Skandik and Tarantine. 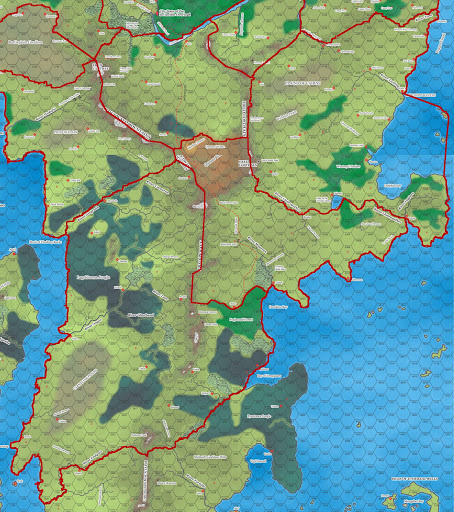 Jarldom of Skandry  occupied for hundreds of years by Skandik raiders before the Invincible Overlord reached an accord with Jarl Sigvids in Ossary, in return for his fealty in suppressing new arrivals to the Pagan Coast, Sigvids became the acknowledged ruler of the Duchy of Mill Haven, now usually referred to as Skandry.  In doing so the Jarl gained dominion, not only over the coastal strip the clans already held, but all the lands east of Ered Losthain between the River Torn and the Llobregather.
The land ceded to the Skandiks run from the mouth of the River Torn upstream to it;s source then across the hills to the source of the eastern tributary to Archlin Stream and down to the frist tributary from the mouth (hex 3925). Up the tributary to it's source (hex 3826) along the hills through Neuwag's Neck (hex 3527) to Ered Losthain (hex 3428).  Down the crest of Ered Losthain through Fatherhorn Mountain (hex 3431) to the source of the River Llobregather (Map 2 Hex 3503) then down the river to it's mouth and back north along the cast to the mouth of the River Torn.  It also includes the minor islands at the mouth of Dolphin Bay. 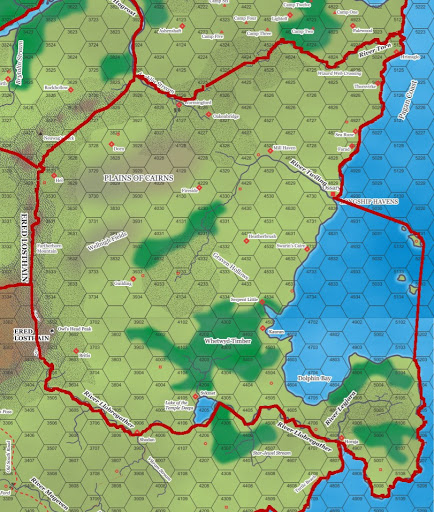 County of Zotheim  when the Invincible Overlord gave Mill Haven to the Skandiks, he compensated the Virdii Crispa family, who were the original Dukes, with a new holding carved out of the territories of the Altanian tribes. They dominate the Old South Road from their great keep at Bellystone Ford and are  granting fiefs to adventurers who they feel can deal with the resentful Altanians wandering through the new croplnads - and who will support them against the Skandiks when the time comes.  Rumors of Imperial galleys in Zothay abound, the Count is looking for a strong ally to counter the Jarl's ships.
Zotheim's boundaries start at the source of the Llobregather (Map 2 Hex 3503) and continue down stream to the coast, south along the coast to the Fogbound Forest,  along it's northern bound to the foothills of Ered Perack (Map 2 Hex 2913), then jogging north (Map 2 Hexes 2911, 3010) along the crest of Ered Perack until it meets the Cloudwall Mountains by the edge of Queans Waste (Map 2 Hex 3004).  Northeast along the crest of the Cloudwalls past the source of the Greyrush (Map 2 Hex 2801) the edge of the Hetflas Dunes (Map 1 Hex 2734 ), then east along the edge of the dunes and Queans Waste to Ered Losthain (Map 1 Hex 3433) and back south to the source of the Llobregather. 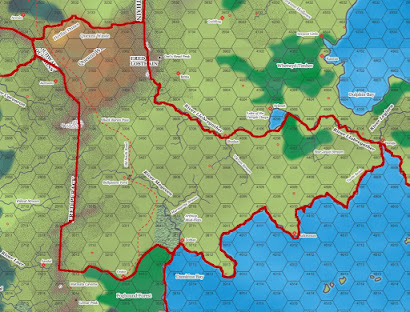 Altanian Marches - the vast area south of Greyrush and the Llobregather were added to the lands of the City STate of the Invincible Overlord through treaties with Altanian chieftains, merchant traders, eager adventurers and finally outright conquest pushed the more or less controlled border south to the River Endgate, past Bludgeon Peak, across the northern tributaries of the River Farhills and over to the Bay of Trespasses.  The Invincible Overlord claims the rest of the peninsula, but no one living there cares or has seen a soldier or tax gatherer.  The Overlord rules here directly through his favorites.  Adventurous courtiers compete for an assignment to rule a fief for five years in the hopes that they can make it hereditary - or at least a lifetime benefice.
The northern boundary is the Greyrush, Cloudwalls and Ered Perack down to the Fogbound Forest, the entire peninsula between them and the Endgate to Bay of Trespasses line described above is considered and taxed as part of the Marches.  In addition to scattered benefices, towns and villages there are numbers of "wild" Altanian tribes who do not acknowledge the change in ownership.  A wise fiefholder is ready to trade with them as they cross his or her lands in exchange for leaving the crops and cattle alone. 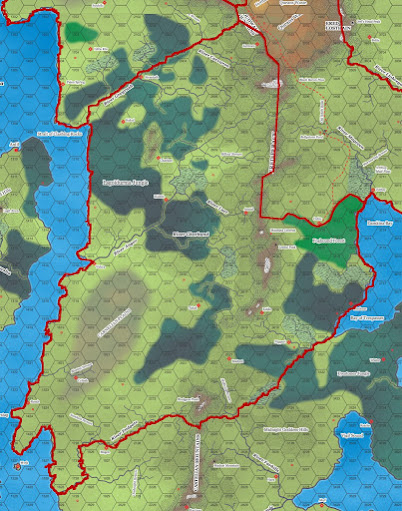