Here's a floor plan from my still being written Call of Cthulhu adventure.  Igman's is a slightly disreputable boarding house that can be used (freely by anyone, but please give me some credit) as an adventure local.  It's based off of Design No. 30 - A Model Suburban Cottage in Woodward's Country Homes.  I added a 3rd floor as a copy of the 2nd floor, and removed the indoor bathroom on those floors to create a servant's stair leading to their rooms in the attic.  The grid scale is 5 feet or 1.5 meters, the actual plan sizes are listed in many of the rooms, and may appear to vary slightly from the grid - the perils of electronic formatting, reformatting and resizing.

The basement includes a 10' wide Area covered by the Main Floor Veranda
Posted by Rod Thompson at 9:27 PM No comments:

Email ThisBlogThis!Share to TwitterShare to FacebookShare to Pinterest
Labels: Call of Cthulhu, GIMP

The building is nestled in second growth woodlands above the head of a ravine.  The area was formerly a source of lead ore (galena), but the mines have played out and production has moved elsewhere.

The building is constructed of the native stone.  Anyone walking up to the door will notice that it's built right over the end of the ravine (dark green area on the right) that Fever Creek flows down.  Looking back a few steps along the edge of the ravine, onlookers will see that there is a partial wall under the building, with a ten to twelve foot gap in the center.  Unless someone is under the chapel with a light source, it's pitch black underneath.

The interior is strikingly bare, with only a few pews around the walls.  Any one examining the stained glass windows will see illustrations of various scenes from the Old Testament of the Christian Bible.  Eve being tempted, Moses and the bronze serpent on the pole; Isaiah 14:29 and such.  The floor is scuffed and scratched in the center as if groups of people often milled around in the same area.  The investigators footsteps echo from below as the cross the room.

In the vestibule is an overhead trapdoor, accessible by a stepladder found in the room behind the pulpit.  The trapdoor has a padlock on it.

Across from the vestibule is a small area containing a narrow staircase leading down.

Chained to the pulpit is an English language translation of Creencias de los Salvajes Indios.

The lower level is essentially one big open room, the walls of the ravine have been roughly finished with the native stone to provide a level foundation for the building above.  The right hand side is open to the ravine, the left hand side is a ten foot passage hewed out of the stone, it Y's a few feet in - possibly an entrance to one of the old lead mines.

Posted by Rod Thompson at 6:21 PM No comments:

Email ThisBlogThis!Share to TwitterShare to FacebookShare to Pinterest
Labels: Call of Cthulhu

Needed an abandoned mine for an adventure, so thought I'd give the cavern generation rules from Wilderlands a spin.  Going to say I'm not impressed, with a 10% of the tunnel ending each roll the mines are quite small, especially as there is only a 5% chance of a branch or cross tunnel to generate alternate paths.  Caverns are encountered, but there are no rules for generating multiple exits from them.  As short as it is, it will work for the adventure I'm working on, but the Random Dungeon rules from the AD&D DMG are better.

At one point I had intended to do a series of gridded building plans based on one of these resources. Years later, I only ever did one. I find these old architecture books on Gutenburg to be a valuable way to quickly come up with a building layout I can describe to the players.
The trick to these is to find the list of illustrations or plates, these usually provide clickable short cuts to the floor plans. Otherwise keep scrolling, they're in there somewhere.

The Ten Books on Architecture by Vitruvius - classical roman architecture, covers temples, forums, villas and houses
History of Indian and Eastern Architecture by James Ferguson - mostly building elevations and details, but there are some floor plans in there, including a couple of temples located in caves. 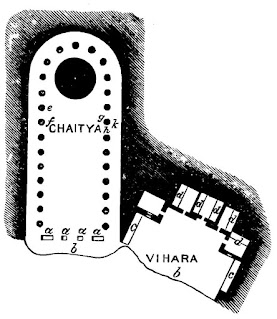 Chaitya Cave, Bhaja
The Early Norman Castles of the British Isles by Ella S. Armitage - what it says on the cover. You don't get interior layouts, but you do get site plans of castles for intrepid adventurers to sneak into or assault.

Virginia Architecture in the Seventeenth Century by Henry Chandlee Foreman - not a lot of plans and many lack detail, but there are a number of drawings of Native American structures that can be used by your barbarian and orc villages.

Palace and Mosque at Ukhaidir by Gertrude Lowthain Bell - despite the name it includes Greek house plans, a plan of the Roman fort at Housesteads as well as more oriental dwelling plans, along with the palace and mosque layouts.
Rural Architecture by Lewis Falley Allen - moving to America this book has detailed floor plans for farms and plantations. It includes plans for outbuilding such as a piggery and smokehouse.
Woodward's Country Homes by Geo. E. and F. W. Woodward - a couple of dozen house designs from the Reconstruction period. Also plans for outbuildings like an ice house and carriage house
Bennett's Small House Catalog 1920 by Ray H Bennett Lumber Company - dozens of floor plans suitable for eldritch horrors to ooze out of when playing Call of Cthulhu. With price lists and pictures of internal details.

Convenient Houses by Louis Henry Gibson. Fifty Gilded Age domiciles
There's more books on Architecture at Gutenberg, but they are mostly antiquarian volumes on specific architectural details, rather than floor plans. Nice for color, but don't help design an adventure.
Update:  All the links broke overnight, don't know if it's Blogger not letting me link to Gutenberg or what happened.  Fixed them 11/08/20.  If not just search for the titles on Gutenberg and you'll find them. SOrry if you came and none of the links worked - RDT
Posted by Rod Thompson at 8:37 PM 1 comment:

I'm writing up a CoC adventure and needed a text behind the cult.  After following some very interesting rabbit holes on the Internet, I came up with this.