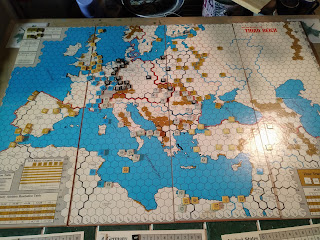 Germany - Abwehr agents determined that the northern flank of the Maginot line was only weakly held by disaffected reservists  [I had used a reinforcement counter just to hold the line during initial set up and forgot to reinforce it during the French Fall 1939 turn.] and as the RAF was operating out of southern England, they would be unable to intervene at the chosen point of assault.  Planning for Fall Gelb  changed to orient the attack through Luxembourg and to the south to take advantage of this opportunity. Preparations were accelerated and the attack was launched in November, with  the Luftwaffe engaging the Armee del'Air  suppressing the Gallic squadrons.  The panzers succeeding in overrunning the Maginot line and taking Metz.  The tanks wheeled north and took the regular French infantry in the flank at Sedan.  Despite being surprised the regular French troops destroyed a Panzer division before they fell.   Hitler has moved new panzer divisions to the Rhine along the Belgian border.

Italy - Athens fell after a bloody siege, where British and Greek the defenders traded their lives for an equal number of Italian troops.  In a bold move, Mussolini ordered the execution of Operazione C3, sending the entire Italian fleet as an escort for the troops invading Malta.  The French, having previously reinforced their Mediterranean Fleet and forward deploying it to Corsica and Tunis, forced the Strait of Messina and engaged the Italians off Cape Peloro.  The Regia Marina defeated their French Fleet, but Admiral Cunningham  had also committed the entire British Mediterranean Fleet to the effort to stop the invasion.  With the ships from Alexandria carefully routed along the coast of Cyernaica, they slipped past the patrols of the Regia Aeronautica operating from their bases in Rhodes and rendezvoused with the entirety of Force H from Gibraltar off of Cape Passero, where they inflicted a crushing defeat on the Regina Marina in a pitched battle.  All the combatants retired to make repairs.

France - after the first Battle of Sedan, the French moved their troops south from the Belgian border and north from the Alps to counter attack, even pulling their armor reserve out of Paris.  The RAF redeployed to fly Ground Support missions against the Germans in conjunction with the French counter attacks.  Sedan has been regained and Luxembourg liberated; two panzer divisions remain surrounded in Metz.  Marshall Gamelin loudly assures the press that the Boche will swiftly be expelled from French soil come the new year.  They hurriedly reconstituted their battle losses, ordering aircraft from the United States as Dewoitine is retooling their aircraft factories to produce the new D.520.  In North Africa, the French Army has crossed the border into Libya, but rumor has it they will be ordered back to metropolitan France with the New Year.

Britain - the BEF was redeployed to cover more of the Belgian frontier when the French Army moved south, along with the RAF send a Group to Dieppe to support the French.  The Royal Navy is flush with it's victory over the Italians, they lost ships of their own but the government sees them as successful and not needing a major reinforcement at this time.  Units in Egypt have moved into Italian Cyrenaica and are reported at the gates of Bengasi.

Russia - Stalin broods in the east, awaiting the new year and the new decade.  The Decade of the New Soviet Man who is destined to crush the fascists and destroy the capitalists in the West.  The only question is how he will accomplish it.