How Big is that Town?

Urban Population Density in Antiquity
I like the world building aspect of gaming. That's probably the biggest attraction for me to being a DM is to be able to create campaigns and settings. But one of the unanswered questions in all of the RPG materials I have picked up over the years is how big is the town? Not in terms of population size, that goes back at least to AD&D, but in terms of area. Not surprisingly, this is dependent on the type of civilization you are modeling. As Scheidel says concerning urbanization rates in his paper Roman population size: the logic of the debate "we must allow for the possibility that direct analogies between urbanization levels in antiquity and in later periods may simply be irrelevant because they seek to equate conditions in two very different environments: Greek and Roman societies, with their poleis and civitates that fused cities with their respective hinterlands, [than] post-Roman Europe, with its much more pronounced boundaries between city and countryside" Given that caveat, I did some research based on the area figures of classical cities mostly from Ancient Town Planning by Francis Haverfield, generate a correlation between population and area that can then be used as a guideline when constructing urban areas.

Note that this includes roads, alleys, public buildings and spaces, so the actual size of living quarters will be much smaller.

Cities are entered multiple time due to finding multple estimates of area and population.
1 - Area from panacomp.net. Travel site, far too small for any of the population estimates. Suspect that it refers only to the actual dig site.
2 - Area from The City in Late Antiquity by Dr John Roth
3 - Area from Roman Corinth: An Alternative Model of the Classical City - Donald Sykes

Looking at the data, I could see that some of it just didn't fit. Especially the area for Smirium from the panacomp.net travel site. I concluded that it probably refers to the actual dig site, not the area of the Classical town which was at one point one of the capitals of the Tetrachy. The population density was simply impossible, even 16th century Venice didn't exceed the range of 450-510 persons per hectare.  On the other end of the scale was Silchester, a well documented site in England where the inhabitants either all lived in what the banking business calls Single Family Dwellings rather than the insulae common to the Roman urb or else contained a considerable amount of grazing/garden land with in the site.

Removing records with population densities above 700 and below 50 persons per hectare, I constructed the following graph. 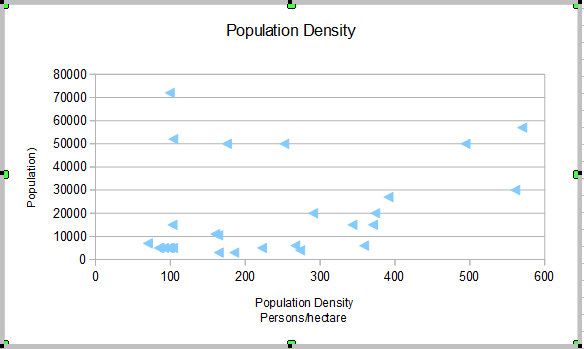 Metropolises are all over the board for population density, but considering that two of those cities (both Neapolis entries) are based off of my best guess rather than any population data I found, they're not really worth anything.

The smaller cities and towns do cluster, first tightly at the 70-100 persons per hectare area.and then more loosely from 150-400 persons per hectare. My hypothesis form looking at which data points were in each group, was that the lower cluster indicated a roughly standard colony foundation and construction where the town site had been laid out with an eye to future population growth,  The second group would then represent mature, stable communities.

And that's where I left my analysis, because I found that to quote Douglas Adams, it wasn't "worth a load of dingo's kidneys" to continue.  For one thing, with the exception of some recorded population sizes of the initial colonizing parties, most Classical urban population figures are calculated from the area of the ruins.  So all I have been doing is reversing the calculation.  In addition, I had stumbled across a paper that had done the analysis with a great deal more rigor than I would be able to.  In his study A New Perspective for the Demographic Study of Roman Spain, Monfort performs a more complete analysis of the available data and provides the figures of 326 persons per hectare for large urban centers and 236 persons per hectare for smaller centers.   Both of the figures fall with in the my range of 150 - 400 for mature urban centers.  In applying them to games systems, whatever population sizes the system defines as cities or metropolises will use the large urban center value, while anything defined as a town will use the smaller value.
Posted by Rod Thompson at 10:03 AM