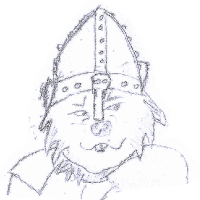 Womgrrs are a semi-successful crossbreed between wombats and ogres.  They inhabit plains and unforested hills, digging communal burrows for lairs.  While Womgrrs physically breed true, their mental capacities vary. 25% of the population are Chaotic Evil and Viscous with Low intelligence, resembling their Ogre ancestry, these fight with weapons and armor preferably.  50% of the population are Neutral with Low intelligence, they fight with their claws and rarely are given any armor.  This group makes up the bulk of the gangs and Warbands which will always be led by one of Chaotic Womgrrs.  The last 25% are Semi-intelligent vegetarians, which will only fight if cornered in their burrows.  A particularly cunning Chaotic Womgrr may use these as arrow fodder, pushing them ahead of the Warband to absorb damage and get magic users to self-identify.  These will retreat, underground if possible, in response to any damage. A DM should not award much XP for killing them unless they are used as above.

* the WomGRRs special ability is improved defense against attacks from the rear.  The thick cartilaginous back end provides improved protection, attackers do not receive any bonus for attacking from the rear.