In my previous post, I was calculating the time and experience earned by a Chivalry & Sorcery Magick User in learning their first spell.  During the calculations I noticed that they had achieved over 2500 XP while studying the spell, which places them at 2nd level.
That is true, but my mistake was in assuming that it also made them Magick Level (MKL) 2 also, and increasing the success bonus as well as the experience points earned, during the rest of the time learning the spell.

MKL is linked to the Concentration Level rather than directly to Experience Points.  The formula is (Intelligence + Unfactored Second Requisite)/10 + (Experience Points)/10.  For Mordacis, that is
(21+ 11 [Bardic Voice for a Power Word Magician])/10 + XP/10, starting with a very respectable Concentration Level of 4.2, he will need 8000 XP to reach a CL of 5 and become MKL 2.

Rerunning the Spell Learning calculations, it takes him 282 days and he earns 5429 XP while learning "Dispel Fatigue", that raises him to 3rd Level (but still only MKL 1).

At 3rd Level as a Non-Fighter, he adds +2 to his body, his Fatigue goes from 1d6+1, to 2d6 (but he only rolled a total of 5) and he adds 2 to his Personal Combat Factor.  He also adds two points to his Basic Influence Factor as he increased in level., and his CL improves to 4.7. 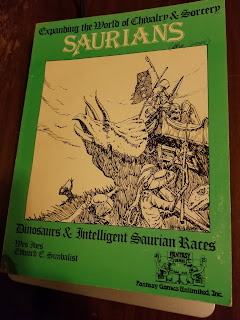 Email ThisBlogThis!Share to TwitterShare to FacebookShare to Pinterest
Labels: Chivalry and Sorcery