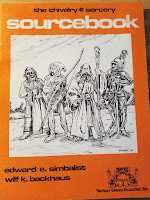 This time I am going to put Mordacis in a campaign context, so that I can determine the languages he learns, as I mentioned in the previous post on the subject.  Speaking of previous posts -scrapping the one about learning languages, I found yet another system hanging out in the back of the Chivalry and Sorcery Sourcebook -  1 point to speak a modern language, 2 points to read and write one.  Magic languages cost 3 points to speak and 3 points to read and write.   It's not mentioned in the
Sourcebook, but I'll give a flat 50 experience points for each language point expended, with the proviso that they don't carry over from level to level. 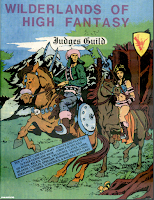 I decided to use the classic City State of the Invincible Overlord and Wilderlands setting.  It will be an interesting exercise in working out conversions from Dungeons and Dragons to Chivalry and Sorcery - I don't recall ever trying it back when we were playing regularly.

The most important NPC for a C&S character is their Master, who teaches them, sends them on errands and rewards them out of the loot they bring back.  After combing through the Wilderlands, CSIO and various supplements to determine the known NPC magick users, I started rolling dice and came up with Althelbrus the Affable, proprietor of the Sorcerors Supply House on Regal Street (Initial Guidelines Booklet I).  In D&D terms, Athelbrus is 6th level, which in C&S is too low to be a master, as you need a minimum concentration level of 75, which would be 9th level.  So to convert, I'll multiply the D&D Level by 25 to determine the C&S Concentration Level - 150, which places gives him an MKL in the 11-12 range.

In terms of backstory, I like the fit.  Dyers would use some of the same materials that magic users use in making colored powders and smokes, so there is a reason why Athelbrus would know Mordacis.  I assume after the death of Mordacis' family, Athelbrus takes him on as a non-magical shop assistant.

As a shop assistant in the Sorcerors Supply House, he will need to learn about all of the material components listed in C&S. (I have a penciled note from the 1970's on Page 73 of mine indicating that there are 265 Common Compounds.)  Under the section on Alchemists there are rules for learning about such things.  Even though he isn't an alchemist, I'm ruling that he receives an equivalent education to Conquest of the Common Metals I and Grasp of the Common Compounds.  Based on his intelligence, it will take him four months to learn everything about the twelve metals and (rounded up) another six months to learn the Common Compounds.  He's not an alchemist, so he will only receive experience for being a Magick User during this time.  When it comes to enchanting materials he will be able to use the rules for Alchemists for more rapidly enchanting the materials under Grasp of the Common Compounds.  Ten months of study at MKL 1, provides 303 Experience Points that I'll add to the previous total for learning the spells, that actually happened afterwards.  He's still 4000 odd XP below 4th level.

Impressing Athelbrus with his quick learning ability and facility for languages, he is then taken on as an Apprentice Magick User and taught his first spell: Dispel Fatigue, as he tires so easily.

Nineteen months and one week of game time after the character began, he is finally ready to begin adventuring.

Languages - as he's gone up two levels, he has no less than 20 language points to spend.  Using my earlier work on the Languages of the Wilderlands, here's how he expended them to earn another even 1000XP.  He's in luck at this point, because so many languages are commonly in use in the City State, he can use all of the language points he earned.

Local Knowledge - because of where he works, he has a 90% chance to
know any Magick User residing in the City State, at least by reputation if
not personal acquaintance. For Magick User NPCs on Map One residing
outside the City, the chance is reduced to 50%.

Identification of Non-Magical Materials - he is able to identify any material
from the tables of Common Compounds. For metals, if he has access to the
required equipment, he can assay metal and mineral samples to determine the
composition.