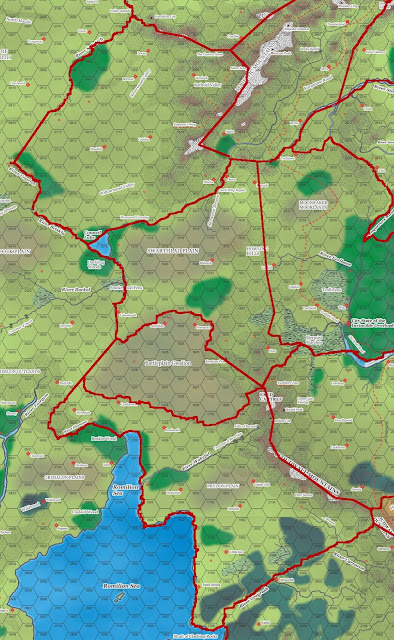 County of Saule - ruled by a branch of the Skandik Sigvids, who traded their ships for horses, the vales of the county (Willowmead, Silverwood, Rathold and to a lesser extent the Chaos Nest of the Carrion Abyss) are the breeding places of the best mounts.  Mostly horses, but pegasi and griffons are found in the Majestic Mountains and trained in Rathold, and Abyssal worgs are the gold standard of goblin cavalry.  The Trade Road from the City State to the Empire crosses the southern edge from the Werewood Crossing to Grita Heath in the Empire.

Saule's borders run from the Carrion Abyss in hex 1808 east passing over Sabre Scarp to the crest of the Majestic Mountains, thence south west along the crest of the Majestics and the hills to their southern outlier in hex 1613.  The border runs from there southeast to the Rorystone River, thence downstream to Council Lake, along the northern lake shore, then up the River Briskly and the Gnarith to it's source.  From the source of the Gnarith, the border goes northeast to the headwaters of the Syfwitch.  It follows the Sywitch downstream to the confleunce of it's tributary(hex 1307), then southeast along the crest of the hills and mountain south of Harridrim Cap to Carrion Abyss. 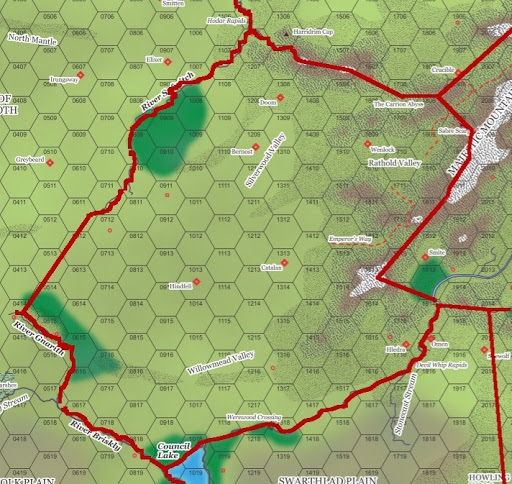 County of Tungraine - the Wilderlands version of Kansas, the county is dominated by the flat Swarthlad Plains and has been ruled by the Virdii Maximian family for over  1000 years.  Located in the center of the continent, it is crisscrossed by irragation channels from it's bounding rivers.  The Trade Road crosses from Gaehill to Werewood Crossing; Battle Road runs from Haghill through the edge of Gwalion towards Spingle tand he the Crossings of Queth.

The boundaries start at Council Lake, following the north shore from the mouth of the Briskly to the mouth of the Rorystone, then upstream to a point (hex 1814 ) between the southern outlier of the Majestic Mountains and the source of the River Stillring.  East from that point to the crest of the Howling Hills.  Thence south along the Howling Hills to the headwaters of the Eorlbane in hex 2121, on to the headwaters of the river defining the northern boundary of the Mermist Swamp in hexes 2122 and 2123 and then to the headwaters of the northern fork of the southern river defining the Mermist Swamp.  It follows that river down to the central tributary, up that stream to it's source (hex 2126), south across Twinhorn Pass to Ered Cantref (hex 2128).  Northwest from Ered Cantref through Keystone Peak to the edge of Battleplain Gwalion (hex 1725), from there the border follows the northern edge of Gwalion until it reaches the source of the tributary to the River Buckol (hex 1124).  It follows the tributary downstream until it joins the Buckol in the Smokewood Fens, then the Buckol from the Fens to Council Lake and back along the southwestern lake shore until it reaches the mouth of the River Briskly. 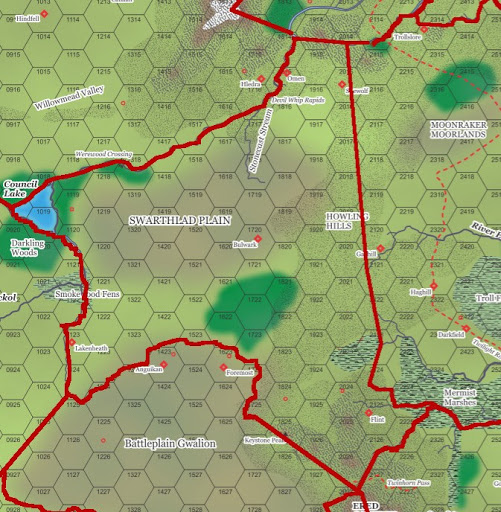 County of Gwalion - a land the Sages Guild considers to be a boiling pustule of space, time and planar magics, Gwalion is ruled by a powerful, mysterious wizard who claims to be a Skandik named Hranfast.  Or at least it is said to be so.  It is also said that the Count has sworn allegiance to both the Emperor and the Overlord ... as well as to more malignant beings from across the cosmos.   Despite this there are peasants working the land, who usually look human.  They say that as long as you keep the animals and your family inside when the sea green fog covers the land.

The Battle Road runs across the northern edge, heavily fortified and infrequently traveled.  Shorter than the Trade Road, the instability of Gwalion has swallowed and disgorged armies along the Battle Road.  Adventurers have reported a sky with two suns and strange colored humans with unspeakable magics; great living demonic machines fighting; red deserts with strange six legged beasts and other prodigies.  Some, like the Fladhal, Blessed Foreman of Hephaestus in Anvil have been said to have recovered powerful artifacts from Gwalion;  while most simply never return.

Battleplain Gwalion defines Gwalion.  More technically, the border passes northwest from Ered Cantref through Keystone Peak to the edge of Battleplain Gwalion (hex 1725), from there the border follows the northern edge of Gwalion until it reaches the source of the tributary to the River Buckol (hex 1124).   Southwest along a straight line towards the source of the Elvenstar, but trending away to the east at hex 0927 to follow the southern border of Gwalion to hex 1828, from where it jogs back to Ered Cantref. 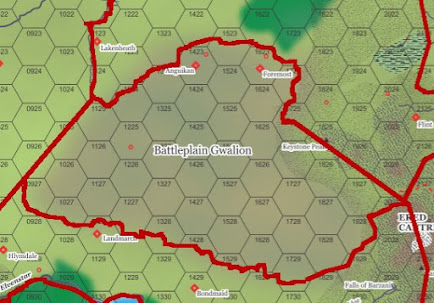 County of East Romilia - the City State's gateway to the Romilian Sea, this province controls the coast and the Lanshan Gap Between the Cloudwall Mountains and  Ered Cantref.  The northern area is one of frequent battle grounds between the hosts of the Invincible Overlord and those of the World Emperor, the old province of Romilia having split in two when the City State was first able to throw off direct rule by the World Emperor.

East Romilia's boundaries coincide with Gwalion's southern boundary, From where Gwalion trends away (hex 0927) from the straight line between the sources of the Elvenstar and the tributary of the Buckhol, following the southern border of Gwalion to hex 1828, from where it jogs back to Ered Cantref.  South from Ered Cantref across Lanshan Gap then southeast along the crest of the Cloudwall Mountains to the source of the River Greyrush (Map 2, hex 2801).  Down the Greyrush to it's mouth, north along the cost to the mouth of the Elvenstar.  Upstream to the source of the Elvenstar, then back to the northeast along a straight line to the headwaters of the tributary of the Buckhol to where the line intersects the edge of Battleplain Gwalion. 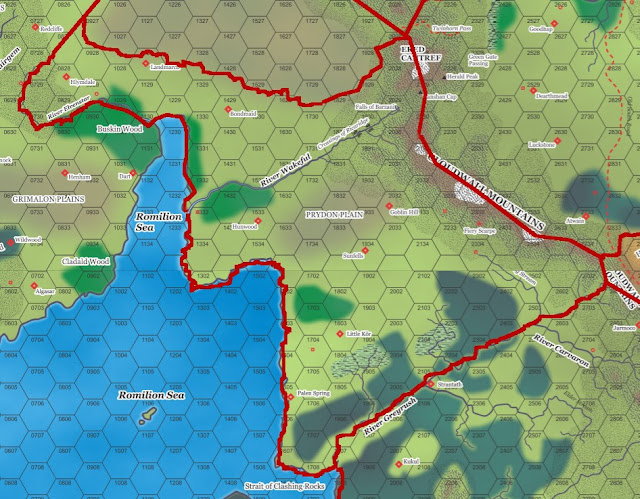