Continuing with the series I was posting back in April and May, I am now ready to start designing a feudal version of the Wilderlands using the 'Designing the Feudal Nation' rules from Chivalry and Sorcery's old red book.  To recap, I've followed Chesterton's advice and studying the Wilderlands canon to understand how the pieces work together - now I'm ready to make changes to take my version to my version of the setting to add a richer background.

Two things are required by C&S when designing a feudal nation - a map of the nation where you can draw the boundaries and the number of great nobles of varying denominations.  C&S recommends a King (the eponymous Overlord), 2-3 Dukes, 2-3 Marquises and about 10 Counts.   Now this doesn't really line up with the Social Level table from ready Ref Sheets, etc that are part of the Wilderlands canon.
BOOM!  Down goes a fence.  As long as I'm using C&S, its Social Class system will be used including the calculated Basic Influence Factor or BIF.  If they interact personally with any of the gods running around in the Wilderlands - Baldur comes to mind - I'll adapt the C&S Social Class to the circumstances instead.
Looking at the map and the canonical castles - including the one in Hex 4014 of Map 1 that isn't  listed in the Wilderlands campaign book; I've decided to start with three Dukes, twelve Counts and one Baron who hold their lands directly from the Overlord.  They will determine all the other feudal holdings, which will include the canonical castles and citadels as well as I expect a number of additional fiefs that I will need to place.
One other design consideration is how strong is the Overlord?  C&S says a strong King, like most of the Plantagenets of England would have holdings equal to 2-3 dukes; while a weak King, like the later Carolingians and early Capetians of France would only be the equal of a duke.  The canon is mixed on this question, the discussion of hosts and vast hosts would indicate a strong king.  The repeated losses to the World Emperor and the tribute paid to him, along with allusions to Warwick rivaling the City State would indicate a weaker king.  What tips me to the weaker Overlord is ineffectual response the Skandik take over of the Pagan Coast around Ossary.  It's far too reminiscent of Rollo in Normandy for me to ignore.  And AFAIK the Pagan Coast was based on that incident.
So I'm basing my Wilderlands more on the politics of medieval France than England.  I do intend to ensure that the holdings of the great nobles are scattered across each others nominal domains.  While this was a lesson that William the Conqueror had learned - contiguous power blocks, like his in France, were detrimental to a central authority.  In late Carolingian and early Capetian France successively inferior tenants had similarly fractured the great feudal demesnes by arrogating rights and holdings to themselves that Charlemagne and his initial successors had only granted to the great lords at their pleasure.  The 1358 years since the founding of the City State surely gives enough time for that to happen.
Here's the starting map of the fiefs of the great lords. 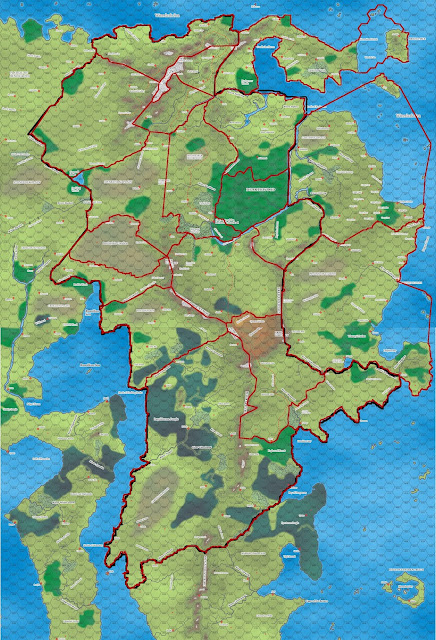