The northern coastal provinces  (barely coastal in th case of the Dwarven subkingdom of Thunderhold) have some of the most tenuous relationships to the Invincible Overlord.  In the case of Thunderhold, the dwarven king pays homage to the Overlord, but promotes trade with his most dedicated enemies - both Gwarenne and the City State of the World Emperor.  Gwarenne is notoriously independent, dominating trade with Valon and the Elphand Lands, Valley of the Ancients and controlling the most direct sea route to the City State of the World Emperor, giving it economic clout to resist the Invincible Overlord.  Vinnior is a narrow windswept coastal plain on the backside of the Majestic Mountains, it's inhabitants are considered to be the most rustic and boorish of all the City State's provinces.

County of Rorystone and Kingdom of Thunderhold - ruled by the Dwarven Iron-helms.  The Dwarven Kingdom of Thunderhold has been, for years, a major trading partner of the City State of the Invincible Overlord.  In the files of the Litigation Trickster's Guild and the various courts of the City State, it has acquired a dual character.  The ruler is still King of the Dwarves, but is also legally the Count of Rorystone ruling the humans above ground, one of the few rulers acknowledged by more than one race.  As the Count he pays homage to the Overlord in return for the rights to collect tolls on Rorystone Road.
It's boundaries start at the confluence of the central tributary of the Stillring in hex 2511, generall north northeast to the crests of the hills in hexes 2608 and 2708, then generally northeast along the crests of the hills and mountains to the mountains east of Demon Tongue. Due north from the there to the coast in hex 2904, west along the coast for ten miles to the deepest point of the bay in hex, then west to Nimbus Tor.  From Nimbus Tor it tends southwest along the edge of the seaward slopes of the Majestic Mountains to through mountains in hex 2106 to the Carrion Abyss in hex 1808.  Turning east it passes over Sabre Scarp to the crest of the Majestic Mountains, thence south west along the crest of the Majestics and the hills to their southern outlier in hex 1613.  The border runs from there southeast to the source of the River Stillring, then back up the Stillring to it's confluence with it's central tributary. 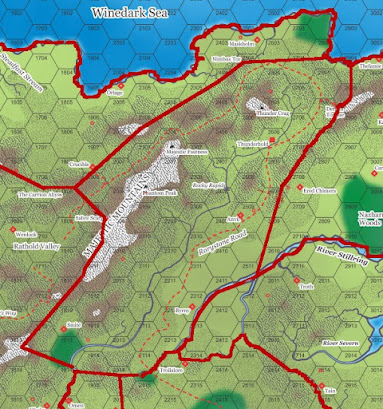 County of Vinnior - ruled by the Seighard family. Once powerful chieftains in Altanis, they were elevated to the major nobility and exiled to this cold and windy land far from their southern home and kinsmen.   They have little in common or respect for the mostly Tharbian peasants native to the land.  This rustic backwater consists of the small coastal plain, dominated by the north wind off the Winedark Sea, where the population practices subsistence farming and fishing.  The hills and slopes on the far side of the Majestic Mountains and nearby ranges provide grazing for sheep and goats as well as a source of monster parts for magic users through out the region.
Vinnior's boundaries run from the deepest point of the bay in hex 2803 west to Nimbus Tor.  From Nimbus Tor it tends southwest along the edge of the seaward slopes of the Majestic Mountains to through mountains in hex 2106 to the Carrion Abyss in hex 1808.  From Carrion Abyss it runs generally northwest along the crest of the hills and mountain south of Harridrim Cap to the tributary of the Syfwitch River in hex 1307, down the stream to the Syfwitch and down the Sywitch to it's mouth on the Winedark Sea.  It turns back along the coast to the east to the deepest point of the bay in hex 2803.