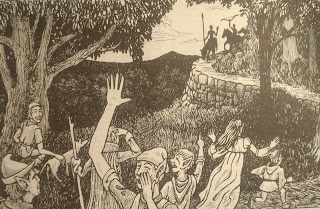 As I mentioned in an aside in my notes on towns, I needed to think through the role of elves and by extension other non-humans in the Wilderlands setting.  In Map 1 alone there are seven Elven settlements, five of which are ruled by men, conversely there's a single human settlement ruled by an elf.  Halflings, orcs, goblins live in settlements ruled by men; only gnolls seem to always have independent communities.  Despite Thunderhold being a Dwarven kingdom, according to the Wilderlands canon, it's actually a human settlement.

That presents an appearance of dominant humanity, which coincides nicely with this non-canon deep history of the Wilderlands.  I was remembering this vaguely as I sat down to write, but it took going through the all canonical sources I've accumulated (originals, reprints, Rob Conley's revisions and some of the 3rd edition release)  and determining that it wasn't in them before I searched the internet and found the post again.  But none of them really give me a sense for how elven society is structured.

Going back to the sources - Tolkien is the spring from which all of these flow.  He describes the Noldor (High Elves) in terms of nobility and kings, the Wood Elves of Mirkwood follow the same pattern.  But this isn't the same as the human patterns of settlement; he shows them in great cities like Gondolin, vast fortress caverns, Menegroth and the Caverns of Thrainduil that involuntarily hosted Bilbo on his journey; great halls like Rivendell and even isolated smithies as Eöl the Dark Elf labored in.  Except for the last, these are all communities with at least dozens if not thousands of individuals living in them.  In contrast to the human and hobbit lands where agricultural references are made in describing the scenery; elves do not appear to cultivate fields. (I searched every reference to Gondolin in the Silmarillion, and never once are fields mentioned, nor can I recall Rivendell or Lothlorien being mentioned as having fields.)  From this, and the persistent association of elves and forest, I deduce that the elvish diet is heavy on fruit and nuts, perhaps including some grains like wild rice that grow in water.   Given the longevity of elves, the thought of them tending large plantations of fruit and nut trees for centuries makes sense.  Even the mortal elves of AD&D can expect to raise several "crops" of oak trees in their life times, and dozens of plantings of fruit trees.  Nor do they appear to raise animals for food or clothing, game is probably the commonest form of meat.  The plantations of oak trees provide an attractive forage for wild pigs; fruit trees do the same for deer - providing an alternative agricultural cycle that humans would view as "natural", just as American settlers didn't realize the relationship between Native American's setting fires, the prairie and buffalo.  It still takes more land per calorie than grain and vegetables, so  they must usually live in relatively small groups, dozens to a few hundreds.  Gondolin and Vale of Tumladen must have been both extensive in size and exceptionally fertile.

This tracks pretty well with the game systems.  AD&D has 20-200 male elves in an encounter, with 100% females and 5% children in lair.  Warhammer Fantasy Role Playing has 10d10 Wood Elves in a settlement.  (Noble elves tend to be lynched for their arrogance when travelling human lands.) ACKS has restrictions on where you can create a Fastness, but otherwise the same as humans for developing domains. when creating Elven Domains I'd reduce the size of the urban areas by considering them Agrarian with a Dispersed Settlement pattern, which would make the largest Elven city 5000-10,000 in population.  Chivalry & Sorcery doesn't really address Elvish realms, although they use human social patterns, less serfs.

Runequest of course is non-Tolkien with elves being living, sentient plants bound at leats looslely to their forests.

So, got a bit off track there, but it's useful to work through these elements when deciding how I'll run them in the Feudal Wilderlands.

1.  I will not increase the size of Elven settlements the way I did with human settlements.

2. I can describe the settlements now as being in the midst of groves of oak, chestnut and walnut with little undergrowth around the settlement.

3. While the senior elven leader in the area is considered a 'king' and subordinates are styled 'dukes'; it's really humans trying to fit elvish concepts into a human framework.  Much like the Romans always referred to German 'kings', when chieftain or war leader was probably a more accurate description of the position.

4.  Somewhat analogous to the Ottoman millet, Elves live in the boundaries of the feudal nation, but are not strictly of it.  They have their own leaders and laws, who judges depends on the offense, where it occurred and the social status of the offender and victim.  In other words, it can be a mess leading to grievances (multi-generational on the part of humans) depending on political influence.  Of course, if your a commoner - no one cares that the elves tattooed your face with blue and red stripes before they escorted you to their borders and told you to never return.