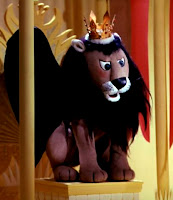 King Moonracer - Ruler of the Island of Misfit toys in the made for TV "Rudolph the Red-nosed Reindeer" holiday special.  What kind of monster would he be in D&D? 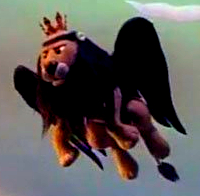 My much better half decided to put the show on this evening, must be twenty years since the kids wanted to watch it, so that's probably the last time I would have seen - or thought of it.  It's not my most loathed holiday special - that distinction goes to anything where they play "The Little Drummer Boy" - pah-rump-a-dum-dum.
When I saw the scene this time I immediately tried to classify him in terms of the D&D or other RPG bestiary.  Obviously some sort of winged lion, but that's still leaves a choice of monsters.
Left: Sullivan's manticore from the Monster Manual.  Bat wings and the head of Rutherford B Hayes.  Close, but Moonracer is a King not a President.
Center: Trampier's manticore from one of the Treasure Assortment card stock playing aids of the 1970's.  Still bat wings and a human head, not sure who it looked like when he drew it, but now after watching the Harry Potter movies with the eldest granddaughter, he reminds me of an evil Hagrid.  Well, Hagrid's dad didn't size matter, maybe he was even less picky in his youth.
Right: Manticore illustration from Warhammer FRP 1e.  Bat wings, human head - Gene Simmons from K.I.S.S.?
One of the fandom wiki's suggested Moonracer was a Griffon.
Left: ACKS Griffon - love it noshing on hobbits, excuse me, "Halflings".  I hate halflings so much I made a completely different race to replace them.  But the classic front of an eagle, rear of a lion coniguration.
Right Top: Griffon from the Monster Mnaual.  It doesn't have Sullivan's or Trampier's initals, so I'd guess one of Hean Wells or Tom Wham's illustration.  Classic configuration for a griffon.
Right Lower; Griffon from Warhammer FRP.  Again, classic configuration.
Maybe something from the Fertile Crescent.  Here's Sullivan's Shedu from the Monster Manual.  Winged, but body of bull not a lion.  Oddly, it wasn't included in 3rd Edition.

We may have something here.

Right: Lockwood illustration form the 3rd Edition Monster Manual.  I think we have a winner.

Lawful Good, flies, turns invisible, innate dimension door ability.  Clerical spells up to 4th level.  For whatever reasons of his own, Moonracer left his sandy desert for the icy one to provide a refuge for the unloved.