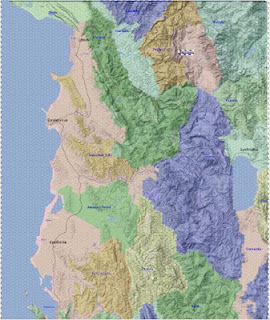 Using the techniques I've already shown, adding layers and a grid, I'm going to add Encounter Areas to my map.  This will be a separate layer for my use rather than something for the players edification.  The first step is to add another layer name 'Encounter Areas'.  The key difference is that now I'm going to change the opacity of the layer, so that previous (lower) layers can be seen through what I draw on the new layer. 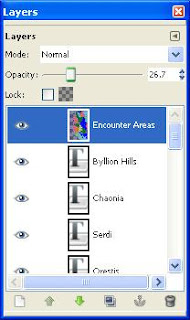 The Opacity control is located in the Layers dialogue box. Here I've set it to approximately 25%, or conversely, what ever I draw will be 75% transparent.

The next step is to add a hex grid to this level, using the same settings previously used on the Grid layer.  The only exception is that I changed the line color to blue. With the Opacity reduced, that makes the superimposed hex grids look purple.

Then I just had to choose which natural features comprised and separated the Encounter Areas, and (tediously) filled in each hex in the encounter area with the Area Fill tool.


In the end I have twenty one encounter areas, in a cool looking map.