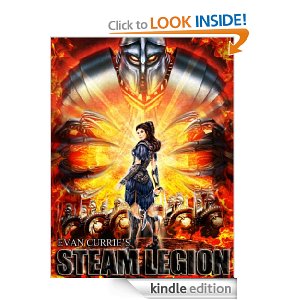 I like steampunk, I read Girl Genius regularly.  I like Roman history, look at my posts on using GIMP to make campaign maps.  I was sold at the title Steam Legion.

The author Evan Currie is (apparently) an established author of Mary Sue's.  This represents his first foray into alt-history and he is refreshingly up front in his forward that he is no historian.

He's quite right about that, he also appears to know little, and research less, about topics as diverse as geography - the Nile is noted for flowing south to north, yet his heroine moves upstream to the north. To basic engineering - going from Heron's aeolipile to a steam engine driving a wagon in less than dozen years ignores decades of work to go from open systems like the aeolipile to stationary closed systems like the Newcomen engine that didn't need a constant source of water for steam.  And another 90 years to get a practical steam carriage . Plus steam boilers are HOT, I should know as I've used them in the Persian Gulf in August.  If your character gets thrown against an unshielded boiler, even a non-pressurized one, they are badly burned,  not charging into a battle five pages later.  That's assuming that an unwelded metal boiler wouldn't spring a leak the first time it hit a pothole in a wagon with no suspension.  If you want a believable description of how to use an aeolipile to power a vehicle, read Terry Pratchett's Small Gods.

The description of the Roman military and society is also execrable.  The Auxillia weren't a system of military reserves, they were non-Roman citizen units, often cavalry, or archers, although they were originally non-Roman troops of any sort.  They lost a legion, they raised a legion.  They did have colonies of retired soldiers planted in many lands, which could be called to arms.  But the difference between light infantry (peltasts) and heavy infantry (legionnaires) is a matter of training more than equipment.  The Romans most emphatically did not use the phalanx.  The phalanx was a formation of spear men, really pikes. The Romans, as he describes quite realistically, fought with pilium (javelin) and short swords, the infamous gladius hispanica.

I also had to wonder where did his Zealot commanders get such good training and communication systems?  He depicted them as being immune to the fog of war.

His description of the Emperor Nero is idiosyncratic to say the least and I actually found the plot that he was being slowly poisoned humorous as Nero was widely considered to have used poison to off his dear uncle the Emperor Claudius.

Ok, I really ripped the setting.  But I'll also say that the writing was pretty good overall, I found the characters of the Centurion Cassius and Tribune Gordian compellingly believable and I think if the author had had an editor the overall story would have been worth reading.  I probably would have recommended it in that case.  But as it is - 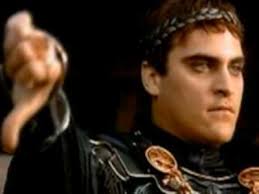