When WotC released PDFs of many of the original AD&D source books a few weeks ago I picked up a copy of the 'original' DDG.  Last weekend, I borrowed my DMs hard copy that he's had since it was originally published.
Both of the manuals use the wonderful Erol Outus cover of two clerics fighting it out under the avatars of their deities.  Both have identical title pages, stating that they are copyright 1980 TSR Games.  Indeed there isn't much to say that's different ... except that Mike's has a few extra pages.

Yes, he proudly owns the real first edition DDG with the Cthulhu and Melnibonean Mythos entries.

Oddly, TSR did not label the revision as a second printing, even though they renumbered the pages and would have had to reset the type for the table in Appendix 3 and the Index.  And I doubt that Lake Geneva was a hot bed of early adopters of computerized printing at that time.  Especially as SGML (Standard Generalized Markup Language) wasn't developed until six years after the DDG was published.

Because TSR pulled and re-issued the publication we've lost a good many wonderful line drawings by the early illustrators of the genre, like  Otus, Dee, Sullivan and Trampier.  That may be the greater loss than two sections of a book that could have been entitled 'How to Kill Heros and  Deities in One Easy Lesson'.

By 3rd Edition the DDG only contained Greek, Norse and Egyptian pantheons, along with the 'official' D&D pantheon.  However, some of the Finnish pantheon from the 1st Edition were recycled as deities in Forgotten Realms - Ilmatar, Mielikki, and Loviatar.

Nor do these editions contain any of the pantheon created for Gygax's original campaign, even though St Cuthbert, and I believe Pholtus, had been well established by 1980.

I'm glad I picked it up as there are some ideas for monsters and magic items in there that I haven't seen elsewhere - especially as I know Mike won't part with his.  As he puts it - "it's important to buy early'.  That sounds like a good slogan for a Kickstarter.

I'll leave you with the classic Erol Otus illustration of Theleb K'aarna from the Melnibonean Mythos. 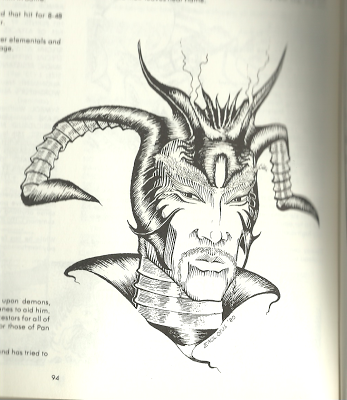 Email ThisBlogThis!Share to TwitterShare to FacebookShare to Pinterest
Labels: Advanced Dungeons and Dragons