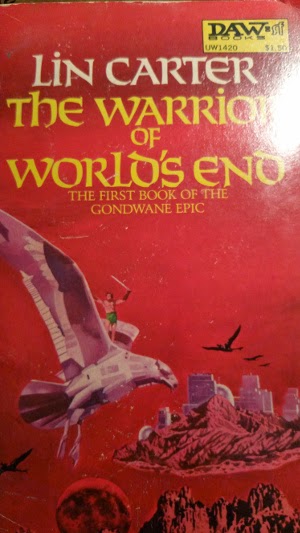 Lin Carter was the last of the great? pulp sci-fi/fantasy writers.  At least the last one I read with any consistency.I started picking up odd volumes of his when I was in high school, these aren't great literature, but they are (usually) fun reads.

This is the first volume of his World's End series, following the career of one Ganelon Silvermane.  Despite it being a series, the books are essentially standalone volumes. I picked up the third or fourth book in the series first and didn't find any of the others until sometime in the last five years.

Ganelon isn't a human, rather he is a construct of the mysterious Time Lords (no I don't know if Carter had been to England and caught the first Doctor on the telly, but the timeline would be right).  Released from his vault fully grown but with the mind of a new born, he is found and adopted by Phelsco the Godmaker and his wife during the Eon of the Falling Moon.

In quick order (the book is only 151 pages) he almost singlehandedly defeats a horde of 60,000 rampaging Indigons, is apprenticed to the Illusionist of Nerelon to escape being sent to serve the The Queen of Red Magic, is captured sold in slavery, escapes while rescuing the nubile Sirix Xarda, girl-knight of Jemmerdy and saves the Tigermen from the Airmasters of Sky Island and their Death Machine (all capitalized terms from the book).  It's a quick romp through a gonzo future and Ganelon's adventures are just starting.

I give it three skulls for the writing and the fourth because it consciously and conspicuously  lacks all seriousness.