So I need a calendar.  Easy enough there's one on my phone and one hanging on the wall in the kitchen.  In a couple of weeks (if not already) there will be kiosks of calendars featuring everything from cute kittens to Harley babes in every mall in America, I can almost certainly find a fantasy themed one to hang on the wall in the office.  I'm not going to do it.  Yes, I'm lazy but I also like my fantasy to have some grounding in reality.  I won't let whip daggers into my campaigns because the physics don't work.  Magic yes, mundane object that break physical laws, no.  It's about getting the 'feel' I want from my campaigns.  In this case I want my characters and NPCs to be able to relate to a calendar that could have been in use in the setting.

Which means I need three calendars, our mundane calendar to track my time and then a Greek calendar, as Epirus Nova is heavily colonized by Greeks and a Roman calendar as the Romans have been ruling it for decades and many important NPCs will be Roman.  This opens up one of the opportunities I enjoy about world building, researching things that are only of interest to dead Victorian pendents, like Hellenic and Roman calendars.

Starting with the Hellenic calendars, the plural is important, each city had it's own calendar sometimes the names of the months matched, sometimes they didn't.  Athens started it's year around the summer solstice, Boetia around the winter solstice and many others around the fall equinox.  The Greeks used a 12 month lunar calendar.  That is each month started on the new moon and ran until the next new moon.   So a year was 354 days, which they reconciled with a solar year by adding an extra month in every third year or so.  None of this was terribly precise as each city determined which day the new moon occurred on and whether the succeeding month would have twenty nine or thirty days.  So any system I come up with that loosely follows that pattern will give me the 'feel' I want.

As far as the names of the month, other than the Attic calendar used in Athens and common in the Ionian speaking areas of Greece, most of the other calendars only have passed partial lists of the months down through history.  Epirus is an exception as a complete list of the calendar months and their order has come to light from the recovery of the Antikythera Mechanism, which was apparently made in Epirus and had the names of the months inscribed on one side. 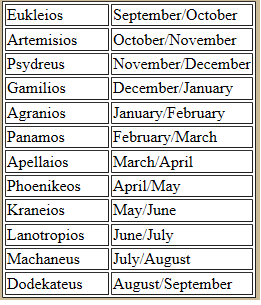 Now the mechanism is circular and there's no marking that has been correlated to "the year starts here', so I decided that the year would start in September and made a guess that the Eprian month of Gamilios corresponded to the Attic month or Gamelion which ocurred in December/January of the solar year.  It's a pure guess as the Hellenic calendars could share the names of months, but have them in different orders.  But it provides this list.

Note that we're still stuck with twelve lunar months for 354 out of 365 days of a solar year.  How to reconcile?  Well, traditionally the Greeks would add a month whenever it got too far out of sync, usually around every third year.  They just called 2nd

Roman Calendar
Conceptually, the Roman calendar is easier because the common Gregorian calendar is an outgrowth of the Julian calendar, instituted by Julius Cesar in 45 BC.  Of course, I set the campaign timeline right after the fall of Carthage and now it's advanced to 142 BC, when the Romans were still using the calendar of Numa.  Like the Greek calendar it had twelve months and had a year of 354 days.  So it shows it's lunar roots, but by this time it no longer followed the lunar cycle.  Months were of a fixed duration 28 for February, 31 for March, May, July and October, the rest had 29 days.  The other major difference from our calendar was that Julius and his adopted son Octavian had not yet established their absolute power over their competitors in Rome and renamed months in their own honor.  July and August are still known by thee numeric names of Quintilis and Sextilis.  The Romans reconciled their calendar to the solar year by taking the last five days of February and adding the them to the difference, calling the Frankenstein month Intercalis.  I'll be doing this every second year.

The Epoch
The epoch refers to the starting point for the calendar. The Romans used the mythological founding date of the city (753 BC), we use the medievally calculated date of the birth of Jesus of Nazareth to start the numbering of the years.  For computers, we use January 1, 1970.  I need to establish the epoch, as not only are the Roman and Hellenic calendars no longer used, but the corrections that were made, were made as with an eye to political and religious advantages and there is no formula to determine what the calendars would be if their use had continued.

Now the Roman calendar, since it matches our months, I can start on any January 1st.  But with the Hellenic calendar I decided I'd try to find a month where the new moon fell on the 1st, so that they would start together.   Researching dates of the new moon, since 2000 I found that serendipitously 1 January 2014 was a new moon.  Epoch established.

The calendar can be found at this link.Epirus Nova Campaign Calendar

Notes on the calendar format: Included here as Blogger has a page size limitation of 1MB, which I exceeded when I tried to lay out three year-long tables, which is why 2014 starts in September.  At the end of 2016, I'll have to recode the page to be more dynamic.  But it took me two weeks to get it to where I'm satisfied to publish it.

a.u.c. - ab urbe condita Traditionally Roman years were counted from the mythological founding of the city in 753 AD.

The next most important date was the Ides of the month occuring near the middle of the month. On months with 31 days - Martius (March), Maius (May), Quintilis (July) and October - the Ides fell on the 15th, other months it fell on the 13th. Counting backwards eight days from the Ides gives the date of the last named day of the Roman month, the Nones.

Prid. stands for pridie, which means preceding.  Prid. Ides means the day before the Ides, the 12th or 14th day of the month depending on how long the month was.

When writing individual dates the month would be appended, so a.d. III Nones December means two days before the Nones of December. Since December is a short month, the Ides are on the 13th, the Nones are on the 5th and the day in question is the third day in the Roman month of December.

Because they are counting backwards, the 19th day of November would be written a.d. XII Kalends December - refering to the first day of the next month.

Olympiad Greek Olympiads were four year cycles numbered from the holding of the first Olympic games in the year 776BC near the city of Elis. In addition to the Olympic Games, two other contests were based on the Olympic cycle, the Pythian Games near Delphi and the Isthmian Games held in Corinth on the second and fourth years of the cycle. During my campaign the Isthmian Games are not being held due to the Roman sack of Corinth in 146BC.  The notation I'm using - which is not any standard I found, because I didn't find a standard - is the Olympic cycle dot the year within the cycle.  158.1 stands for the first yer in the 158th Olympic cycle. 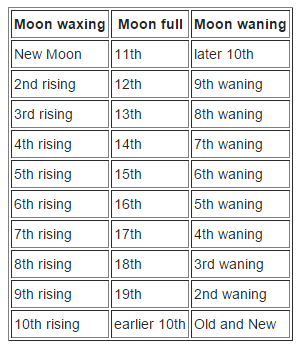 Greek Names of Days  Greek months are lunar months and the days were divided by the moon's phase into rising (waxing), full - no adverb on the day and waning.  These are the terms used in Athens and so may be anachronistic in the setting, but they're the best I have.
The first day was the New Moon - Noumenia. Then the first two phases were numbered consecutively from 2nd rising to 10th rising, then 11th to 19th.  On the twentieth, the day was called the first tenth.  The twenty first was named the last tenth and the numbers decreased from the 9th waning to the last day of the month - Old and New.  In short (hollow) months the 2nd waning was omitted..
Posted by Rod Thompson at 9:39 PM