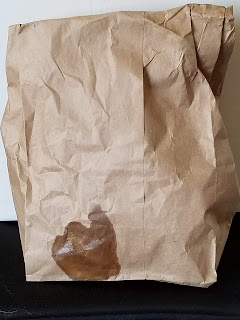 The flawed creation of an apprentice wizard attempting to create a Bag of Holding that would disguise it's contents as innocuous objects a thief would overlook.    The apprentice succeeded - sort of....

The Lunch Bag of Holding appears as a small brown paper bag, wrinkled and having a large grease spot bleeding through.  The bag can hold any object that can fit through it's relatively small opening (3" x 5" / 7.62cm x 12.7cm) at negligible weight, after 50lbs (22.7kg) are reached there is a 5% chance for each subsequent pound (.45kg) of items placed in the bag that it will rupture, cascading it's contents over the floor at the next inconvenient moment.
Items placed in the bag will be transformed according to the following rules.

Items
All other items stored in the bag are transformed based on a percentile roll on the following table.