The countryside is not all orc-infested wilderness, individual farms are encountered not only near castles and villages, but also tucked away by themselves in fertile areas. However, they are built with an eye towards defense of the family and livestock, and are able to hold off a casual raiding party for hours; although a determined war party will triumph in the end. Generally, the inhabitants will have reached some accommodation with any intelligent monsters in the area, such as trading chickens for pelts with the local goblin tribe.
Smart adventurers will look for these isolated dwellings as the sun begins to set; much better to have a roof over your head and walls around you than camp under the stars or rain clouds. See for example Fritz Leiber's The Jewels in the Forest.

This rude dwelling is a single structure with the family at one end and the livestock at the other. The walls are usually dry stone and the roof is thatch. Inside it is dark and smokey, as the there is no chimney or flue for the open hearth. Always built on a slope, the livestock are kept on the downhill side of the building where a small culvert drains the foul slurry away through the wall. This plan can be used to represent a variety of primitive house barns like the Scottish blackhouse or French maison longue. 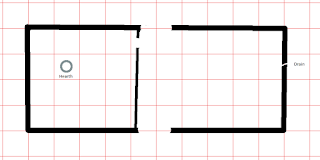 Externally the same, the interior has been made more habitable by adding posts to support sleeping, storage and haylofts; accessible by ladders. The hearth has become a ventilated fireplace, making the interior less smokey at the cost of reduced light and heat. A manger has been added for feeding the livestock. 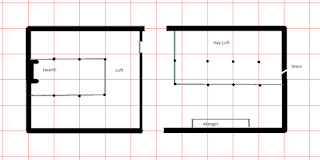 More prosperous than the longhouses, this building contains separate entries and rooms for people to sleep in; as well as stables for cows and horses and a indoor chicken coop. Pigs are kept outside. The hearth is open again, but the thatched roof will usually have an 'Owl hole' for the smoke to rise through.  The walls are timber framed and filled with wattle and daub or brick. 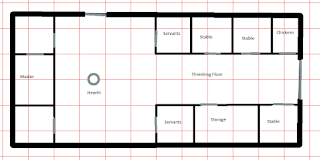