This post details the rest of the Random Encounters the party had during the voyage from the City State to Modron, each encounter is prefaced by the hex on Campaign Map 01 where it occurred.
Hex 3522
An hour or so later, as the Blesinde navigated through the winding channels, whirlpools and eddies between the Confluence Islands, where the Roglaroon bends north and the Hagrost  enters from the east. 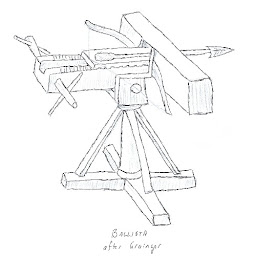 At a cry from one of the crew, the party looked over the starboard side and saw a large dragon like creature swooping down on Captain Chiramnesind1 as he steered the caravel through the turns between the hazards at the speed of  trotting horse.  Not having work to do maneuvering the ship, Ysolt and Mordacis loosed arrow and stone as the salt-rimed, horse head monster2, reeking like dunghill, grasped futilely at the ducking helmsman.  Adenin gave a surprisingly bass roar and began hurling imprecations at it.3  The boatswain and four of the crew ran back to the ballista at the stern.
With a shriek like grinding glass, the beast performed an Immelmann and sped back towards the ship, higher and forward of the first pass.  Ysolt's arrows passed by the beast.
The ballista thrummed and the projectile slammed into the horse like head, followed by two stones from Mordacis' sling striking the beast fairly.  The monster plunged into the estuary a hundred yards to starboard.
The oily slick where it landed was peppered by rocks and arrows and another ballista bolt to no effect before the creature flapped soddenly off in the direction it had first attacked from, pursued by a final futile arrow and sling stone.4

Hexes 3521 and 3522
Running free of the channel, they encountered Maelstrom again, who came close along side and spoke to the captain privately for over an hour before she turned and dove behind the ship as it slowly sailed against the flood tide.

Hex 3520
The lookout shouted a warning and pointed over the port bow at two canoes angling towards the ship from the Dearthwood shore.   The orcs in the canoes were taking advantage of the flood tide to close with the caravel struggling against it.  With the ballista blocked by the ship itself, they quickly ranged one on each side of the ship and boarders began to climb.  It was all over in a flash, with half the orcs and a third of the crew dead on the deck or floating in the estuary.  The big orc with the red stripe tattooed diagonally across his face pulled the surviving pirates and the canoes back towards the Dearthwood shore.6 ore Adenin and Mordacis did what they could to heal the casualties as the caravel continued past the mouth of a river flowing out of the Dearthwood. 7 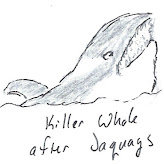 Hex 3517
"Chiramnesind, Chiramnesind, I will be merciful", the orca declaimed from the water.  The whale was covered in tattoos of eldritch figures in a bilious yellow on it's black forehead,  "When the Dreamer Below wakens, apostates will suffer torment deeper than the Kraken dives!  I would spare my old companion the suffering!" 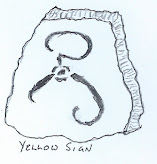 The captain removed a small stone from a pouch and chanted "Effer citatum turpi creatura, quas eiecite te quos eieci!"
"That incantation only works on Those from Without,"  replied the cetacean , "not such as I.  The shantak will not be the last hunter.  And now you have revealed your defense, so the others will not be affected!  Your torment shall be great, as will that of your crew."  The last word was burbled as the whale subsided back below the Roglaroon.8
Chiramnesind turned to the crew and shouted "Let's get to port, you swabs, first round is on me!  That blubber eater is a bigger threat to the sea birds than to us in the goddess' harbor!"  Which raised a cheer from the crew at the immanent prospect of beer vs a more distant prospect of grisly death.
Adenin approached the captain and questioned him about the curious sigil on the stone.  He was rebuffed "If you know it not, priest, it's best you avoid it and return to your temple.  There are things older than the gods that will eat your soul for dinner."  Adenin returned to the group and sketched out teh curious sign when related the captain's warning.