I like mixing and matching between multiple systems, genres and milieus, as my various random encounter tables will show.  One of the things I have somewhere is a sheet of paper detailing my cross system AC conversions.  But I can't find it so I'm going to rebuild it with a little help.

My basic approach for conversions has been to use armor description as the starting point, if you know what chainmail is in AD&D and Runequest, then you can figure out the rest of the armor classes from there.  And since monsters are rated on the same scale as humans (at least for all the systems I can think of); the process is to look at the table I just derived and assign the appropriate AC.

THAC0, %to hit, attack roll - whatever you want to call is more subjective for me.  Usually, I'll look for a comparable monster in the system I'm converting to and peg the attack roll to the comparable.   Take for example, the 'Great Kommata', a gigantic Martian flying beast from Space 1889: it has two attacks Talons and Drop (rocks).  Comparable is a Roc from AD&D, two 3-18 attacks at 18HD.  Add in a rock attack like a stone giant throwing, but can only hit one character.  Presto, all I need to run a combat encounter with one.

Converting to Chivalry & Sorcery is a bit different, as I all have to do is select the appropriately sized attack form, say 'MLB' or Monster Large Bite and it gives me the attack rolls against every armor class.

Magic is either a spell for spell translation to the target system or I need to define the effect in the target system.  For example, "Crumble Wall" in Warhammer FRP is  similar effects to "Transmute Rock to Mud", the stone dissolves into sand instead of collapsing into mud.  The description is different, but the effect and therefore the level is really the same.

This shouldn't be a surprise to the grognards, system conversion has been around since at least the AD&D DMG, right there starting on page 113 where they give conversions for Boot Hill and Gamma World to AD&D (The text mentions both Metamorphosis Alpha and Gamma World, even though Jame Ward wrote both, they use different armor scales).

What I didn't realize until I was looking the the C&S Saurians book, which I was sure I'd reviewed last year, but haven't, is this little gem. 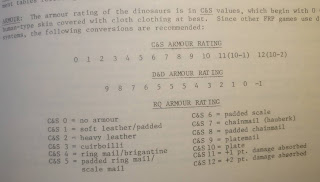 Look at that conversion from D&D and Runequest to C&S.  Of course, the Runequest conversion is handwaving the difference between bronze and iron armor in RQ (iron is 1.5x as strong); so I'd take it with a grain of salt.  Still it's a good reason to rebuild my AC conversion table that I've misplaced.