The final aid I'll develop for adventuring in the Severnais is a set of random encounter tables.  As before, I'm pulling in creatures from pretty much every game in my library to give encounters that sense of whimsy I enjoy.

I should also note that I have a set of Random Encounter Generation home rules that are consulted before I get to these tables.  Over the years I've moved from most of my random encounters being combat and experience point oriented to designing a system that will generate information for the players about the area.  What I have below are tables of challenges they may encounter, or they may just see evidence of and start looking over their shoulders for the monster to appear.

Encounter areas follow natural ecosystem and movement boundaries.  Looking at the map of the Sverenais, I determined that there are four encounter areas. 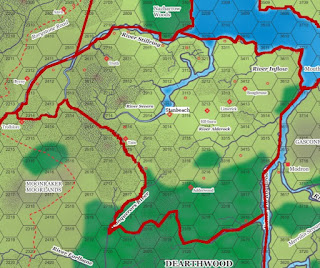 North Dearthwood  The area of the forest north of river flowing out of the Dearthwood into the Roglaroon and the tributary of the Conqueror's River as well as the Conqueror's river upstream from there.  Looking at the Wilderlands of High Fantasy booklet, there are three "Lurid Lairs" listed in the area for Wood Nypmphs, Pixies and Hippogriffs.  From that I have determined that I will use the "Fairy or Sylvan" table in AD&D and the "Elf Wood" table in Runequest when generating the appropriate encounters.  I also ended up with two encounters from Call of Cthulhu in that area, so I've decided that the entire area is subject to planar instability, where 'nexus points' to use the Empire of the Petal Throne terminology naturally appear and enable all sorts of beings to enter the Wilderlands.

Victory Hills  Not a canonical name, but what I'm calling the hills where the Conqueror's River rises.  They extend up to the River Stillring, most of them are outside of the Severnais proper, so I can re-use them as an area when I detail the heartlands around the City State itself.

North of Severn  and South of Severn The Severn provides a natural barrier to movement dividing the encounter areas.

Note that I'm leaving the actual boundaries of the encounter areas rather vague.  These are all or almost all mobile creatures that can have overlapping ranges.  Also, I can roll the encounter and if there's a reasonably close boundary, decide which challenge I want the party to encounter.

About half the challenge encounters are from AD&D and I expect are familiar to most readers, the source of others are indicated below.

(ACKS) Adventurer Conqueror King,    (CoC) Call of Cthulhu,    (Dreamlands) H.P Lovecraft's Dreamlands, a CoC Supplement,    (EPT) Empire of the Petal Throne,    (FF) Fiend Folio,    (GW) Gamma World,    (Infernum) Mongoose's Infernum - Role Playing in Hell,    (MA) Metamorphosis Alpha,    (WFRP)  Warhammer Fantasy Role Playing
(#) - A number in parentheses indicates the number encountered in the lair.  All are from The WIlderlands of High Fantasy.
Creature notes:
Al'mi-raj (Fiend Folio) - Chaotic unicorn bunny
Amoeba (Warhammer FRP) - converted this one to Chivalry & Sorcery earlier
Apparition (Fiend Folio) - ethereal skeleton, can cause heart attacks
Arn (Gamma World) - a 1.3 meter bug that can be used as a riding mount by very small humanoids
Bearoid (Metamorphosis Alpha) - 12' tall golden psionic golden bear.  Uses bows and clubs.
Buzzers (Metamorphosis Alpha) - mutated bees that can blast a party with pure energy.  Enraged by psionics and magic use.
Centisteed (Gamma World) - 16 legged horse that can carry two.  Comes equipped with a force field.  No cupholders.
Change (Metamorphosis Alpha) - mutated robin with chameleon powers.  No attacks, immune to spells and psionics (too bird-brained).
Chnélh (Empire of the Petal Throne) - ape mutants.  Sharp claws and teeth.  Use spears and clubs.  Treat as cavemen, but look like Australopithecus
Cthonian (Call of Cthulhu) - immense thing squidly worms.  Can crush with their bodies, constrict and drain blood with their tentacles.  Oh, they can cause earthquakes too.
Dark Fungus (Metamorphosis Alpha) - psionic fungus brain.  Don't touch
Demon, Artificer (Infernum) - a squat little demon, one of the Engineers of Hell.  This one can understand and fix mechanical devices on a roll of 5+; has +3 natural armor and weeps poison tears that it uses to coat it weapons.
Elf War Party (Runequest) - 1d6 brown elves (look like deciduous trees) armed with bows and swords (bronze) .  They have a decided resemblence to the local trees, oaks, chestnuts, laurel and pine, with bark like skin, interweaving bracnhes for hair and knobby fingers like twigs.  They will be neutral or hostile to halflings and humans; friendly or neutral to 'meat elves' and down right aggressive to other races.
Hawk (normal) (Adventurer Conqueror King) - just a normal small raptor.  If a character can plausibly attract it, it can be trained to hunt small game.  Otherwise, 50% chance it attacks a wizard's familiar.
Hlýss (Empire of the Petal Throne) - six legs and a chitinous shell.  FIght with weapons and a sting, ofetn have jewels set in their shell.  Collect humans, probably for hosts for their eggs.
Humanoid #4 (Metamorphosis Alpha) - Walks on all fours, has poison claws, low intelligence.
Llama (H.P Lovecraft's Dreamlands) - all the possible monstrosities and I roll a normal llama.  Treat as a pony that climbs like a goat
Merchants (Empire of the Petal Throne) - 3 merchants, 8 guards, 23 slave bearers with merchandise.  Merchants and guards have elaborate chlen-hide armor (treat as scale mail, but less cumbersome) and weapons (have 5% chance of being broken if parried by iron/steel weapons).  They have exotic glass wear and chlen hide armor for sale - preferably will trade for iron.  The leader has an "Eye of Abominable Detestation" (treat as double strength wand of fear) and an "Eye of Incomparable Understanding" (treat as area effect Comprehend Languages spell).
Needlemen (Fiend Folio) - humanoid zombie plant.  Shoots needles at you
Patrol (Chivalry & Sorcery) - one knight, a squire and two sergeants from a local fortress.  In the Dearthwood, 75% chance that it is instead 1d4+2 Duneal foresters (treat as rangers) or elves.
Pineto (Gamma World) - ambulatory plant that can carry heavy loads.  Can be ridden, but without the proper saddle, you take damage every turn.
Rakox (Gamma World) - oxen with eight horns and a carapace.
Rényu (Empire of the Petal Throne) - Humanoid dogs.  Can speak and use weapons, can't use magic.  Can be captured and trained, exceedingly loyal servants.  Detect secret doors like elves.
Small Warrior (Metamorphosis Alpha) - mutated ants with a mass mind that can generate a force field
Sphinx (Adventurer Conqueror King) - I called this out to remind myself to check for the differences between sphinxes in ACKS vs AD&D.  Turns out you can generate a random encounter with a sphinx in ACKS, but there is no entry in the Monster section for it.  Treat as a Criosphinx. -
Star Spawn of Cthulhu (Call of Cthulhu) - miniature, but still gigantic copies of Great Cthulhu, 60 feet tall.  Tentacles claws to match their size.  Use magic and cause insanity.
Su-monster (AD&D) - forty years of gaming, never encountered one of these or added it to one of my adventures.  Cross between an ape and an opossum with psionic attacks.
Sun Worm (Warhammer FRP)  Shjockingly, a 6' maggot that discharges electricity.  Double damage if you're wearing metal armor.
Throgrin (Adventurer Conqueror King) - looks like a hobgoblin, paralyzes like a ghoul, regenerates as a troll.  Nasty little buggers.
Url-worm (H.P Lovecraft's Dreamlands) - man sized worms that feed off oils secreted by the dhole.  Used by the halflings of D'haz for unspeakable practices.
Weretiger  (Adventurer Conqueror King)  - treat as AD&D weretiger, with they are naturally stealthy and have a -2 on surprise checks
Yexil (Gamma World) - big (3 meter long with 8 meter wing span) orange furred mammal.  Shoot frickin' laser beams from it's eyes.
Previous Posts in this Series
Wilderlands Trade Radius
Wilderlands Market Areas
Wilderlands Where the Barbarians Roam
Wilderlands Baronies
Wilderlands Baronies, Further Considerations
Wilderlands The Roglaroon
Feudal Wilderlands Part I
Feudal Wilderlands Part II - The Heartlands
Feudal Wilderlands Part III - The Restless North
Feudal Wilderlands Part IV - The Imperial West
Feudal Wilderlands Part V - The Changing South
Feudal Wilderlands: Fiefs - Severnais
Feudal Wilderlands Part VI - Notes on Towns and Villages
Feudal Wilderlands: Part VII - Elves
Posted by Rod Thompson at 7:54 PM