So a recent conversation with my gaming group is leading to the possibility of my running a campaign, which - if I do - will be set in my version of the Feudal Wilderlands.

On a related note, since 19 - frikkin' -78!, I have been entranced by a line in the old Chivalry & Sorcery Redbook - "In the designers own wargaming group, an elaborate set of tables was designed by a member which can locate a character literally within miles of a particular town in France..."  Never gotten to that level of detail, never played in a campaign with that level of detail, but... I realized how close last years efforts put me to that goal.

I'd already pulled the urban (town and village) population from Rob Conley's Wilderlands version into a spreadsheet.  I'd worked out, using Chivalry & Sorcery, the highest nobles and their immediate vassals.  All I needed to do was some quick population subtotals in Excel and roll up the holdings of all of the sub-vassals, which would give me the rural population.  I excluded all non-human settlements, and the totals only include the 'civilized' residents on the fiefs, so bandits, exiles and barbarians are extra. 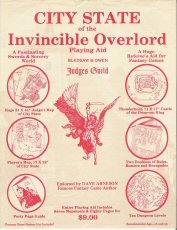