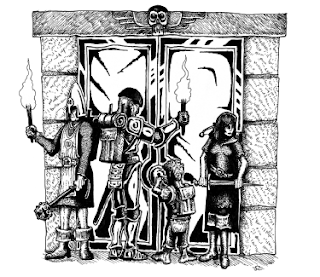 Morgansfort is an introductory module designed for the Basic Fantasy RPG.  I picked up as a freebie from DriveThru RPG.

It's brief introduction gives an overview of "The Western Lands" campaign setting, including major states and a page and a half devoted to the religions of the campaign.  The information on the major states is less than that given in the original World of Greyhawk Gazetteer and only suffices to provide a brief background for the players, including where demi-human PCs may have come from.

The next eleven pages comprise a map and key to the eponymous fortification.  The key includes a more detailed background placing it in the campaign setting and makes it very clear that the setting is a generic medieval society with knights and barons.  The NPC stat lines are as sparse as you would expect from a 1e module, although more background than usual is provided  about the individuals and their unique treasures - should the players embark down the traditional murder hobo route.

After that come "The Old Fortress" the first of three separate dungeons included in the module.  It's a well executed set of lairs inside of an abandoned stronghold.  I like that they provide check boxes for all the monsters HPs, including the random encounters - although I just use scratch paper myself.  For the placed encounters, the writers have included options and tactics for the monsters where appropriate.  The description text for the players is boxed to stand out and brief - readable without needing to paraphrase.The room for the big finale has a standard version and two alternates, changing the monster and treasure.  A very nice touch to allow the DM to run the module more than once or to chose which ever one will mess with his party's minds the most.

The second dungeon "The Nameless Dungeon" has over eighty rooms to explore, more than  three times the size of the first one.  The quality of the work is maintained and they add a unique tapestry and a puzzle that the players need to solve with the help of a handout.  Thoughtfully, they suggest downloading a copy of the PDF, rather than ripping out the page.  You could just scan the page and print it.

The final dungeon is "The Cave of the Unknown" for which the authors provide two pages of background material, which after reading the descriptions, seemed pretty unnecessary; although I'm guilty of publishing the train of thought I used to get to a specific scenario.

This dungeon is even smaller than "The Old Fortress", coming in at just 24 rooms, but does contain an undead spellcaster and a few nasty surprises for an incautious party.  Again the monsters have good tactics and bad guy won't fight to his re-death.

Overall:  A nicely done little booklet.  Getting three dungeons that you can plop into any campaign is good, the quality of the work is excellent even if the creativity isn't of the same standard.