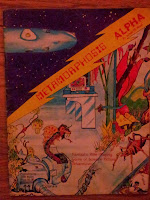 Metamorphosis Alpha was science fiction role playing game written by James M Ward and published by TSR Rules in 1976.  It is also one of the first two RPGs I ever purchased, I found my copy this summer cleaning the basement.

Radiation Resistance and Mental resistance both used cross index charts comparing the power of the attack against the character's resistance to determine damage.  Here we're seeing one of the roots of the hobby, as similar charts were used in hex and counter board wargames of that era. 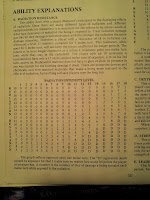 Rules and examples of character generation take up about two and a half pages - including an illustration.

When you consider that the rest of the pages give descriptions of every deck of a 50 mile long starship, lists of mutations, a beastiary with mutated humans, animals and plants and lists of technological treasures, this game is pretty much the epitome of 'rules light'.

I only played it a few times in high school, but the player rewards in terms of advancement just weren't there.  You could gain access to technology, such as robots, and wander around the starship, but unlike Heinlein's Orphan's in the Sky, there was no set goal of achieving control of the ship.  Not being an experienced game master, the system was just too open ended for me to continue with.  So it's been in storage for several decades awaiting for me to level up as a DM.

On a side note the 1e DMG has rules for running a cross over with Metamorphosis Alpha.