Through the Looking Glass

Or when did I become a trend setter?

I wasn't mod in the 60's, cool in the 70's or hip in the 80's, since then my boys have kept me  informed on just how behind the times I am. The latest WoTC article on XP for goblins is causing quite a stir out there, it's been covered at by +Eric Tenkar the Tavern and earlier at  Points of Light - and it's a topic I covered a year ago in XP Evolution - The Orc. 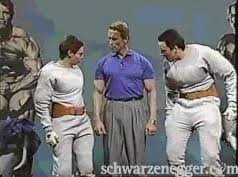 Look, compared to 0e and 1e, characters from the newer editions are 'girly men'.  I mean going from needing to kill 100 Orcs to make 2nd Level to only needing to kill 7, how else can you describe it?

It's the difference between the crime of the century and holding up a candy store.

It's Conan covered in gore, standing on top a pile of his enemies bodies, while listening to the lamentation of their women compared to Mickey and the Beanstalk.

How would you make the comparison?
Posted by Rod Thompson at 10:30 PM

Email ThisBlogThis!Share to TwitterShare to FacebookShare to Pinterest
Labels: Dungeons and Dragons