Solo-gaming for the first time in over twenty years, I can leave the board up and play as and when I can. 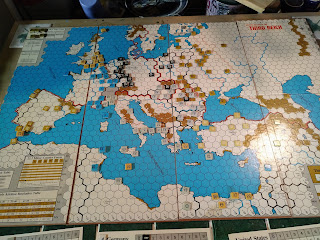 Germany executes Fall Weiss, her panzers over run Polish defenses and are in Warsaw before the Britain and France can react.  The campaign is over in less than a month.  Hitler orders more infantry divisions raised and another Luftflotte; the panzers are redeployed to the West.

Italy launches Operazione Mummius invading Greece from southern Albania.  Dedicating the best units of her army, she punches through the Greek defenses at the battle of Ioannina and her fast tanks race to the gates of Athens cutting off the bulk of the Greek army still deployed in the Pindus mountains.  Mussolini mobilizes army reserves, expecting Britain or France to come to Greece's aid.  He reinforces the Piedmont and garrisons potential invasion sites.

Greece - her army destroys itself in a fruitless counter offensive into Albania.  All that's left is a division of infantry under siege in Athens.

Britain - the War Cabinet and General Staff view the Greek position as hopeless, with insufficient resources in theater to intervene.  Churchill overrules them, demanding the nation be seen to take action after being unable to come to the aid of Poland.  They agree to send the Palestinian garrison to Greece.  Force H in Gibraltar is tasked to intercept the Italian Fleet in the Gulf of Taranto to prevent them from intervening; but the Regia Marina sailed early collecting the detachments from Brindisi and Durazzo enroute to the Myrtoan Sea to stop the British reinforcements.  Admiral Cunningham, however had directed the fleet sail through the Cyclades, chancing navigational hazards over an encounter with the numerically superior Italians.  With both intercepts failing, the British landed in Athens.   At home, the BEF holds Calais and the left flank of the French, covered by the RAF operating out of England.  Regiments are being raised and redeployed as fast as possible, with priority being given to the Mediterranean given France's great military strength.  Infantry has been sent to garrison Gibraltar and troops and tanks have been sent to Alexandria.

France unwilling to await the Germans, but also reluctant to move out of the Maginot Line or invade an even more  reluctant Belgium, ordered the Armee de l'Air to conduct bombing raids on the Luftwaffe bases around Bonn.  These were extremely successful, almost destroying an entire Luftflotte.  The Daladier government called the nation to arms.  Marshal Gamelin, impressed by the Italian armor's ability to penetrate the mountains of Greece, built a centralized armor reserve capable (he believes) of stopping attempts by the German panzers to flank the Maginot line through the Ardennes and positioned to cover Paris.  He remains indecisive on how to respond to a projected German invasion of Belgium in the face of Belgian refusal to plan cooperatively.

Russia invades Eastern Europe bloodlessly taking over the Baltic States, a share of Poland and Bessarabia.  Stalin announces a modification to the Third Five Year Plan limiting military expenditures to focus on building the Soviet economy.