I was discussing this with my friend Jim, and he pointed out that 3rd Reich is an economic game, rather than a war game and you need to build you economies so you can build the units to conduct the war.  He agreed with my assessment of the previous turn that while taking advantage of my lapse in the Maginot line was probably what Hitler would have done.  In the meta game terms, Germany may have been better off to take Belgium and Holland in 1939, providing as many BRP as they would have spent in conquest and broadening the front against France, deferring the growth of the BRP base for one year. 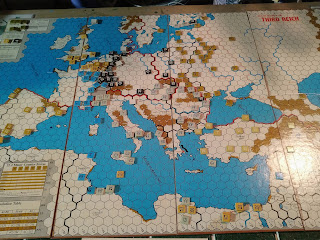 Both Germany and Britain put about 5% of their BRP in SW, both favored building defensive units.  No SW Warfare resolution until 1941

Resolution comes before building, so I'll be six turns in before I work out how Strategic Warfare functions.  Yes, I know it's an exchange system, followed by BRP adjustments, but haven't looked at strategies for maximizing/ minimizing effects.  I created a quick random table for the first year distribution of BRPs, to imitate NO ONE knowing how it was going to work out.

Germany - Took another hex of the Maginot line, retook Luxembourg and Sedan, Metz is no longer out of supply.  In the process they destroyed 2/3rds of the French armor and half of the Armee de l'Air.

Italy - Minor victories in the Alps and in Libya.  Redeployed infantry to Tripoli and armored units to Milan

France and Britain - redeployed units from Belgian border to the south.  Massive attack re-retakes Sedan and shortens the lines.

France recalls 7th and 18th Infantry from Tunisia to the Alps to cover for losses and troops moved to the Moselle front.

USSR - Stalin begins slow build up of units.  Creating an armor reserve and bolstering the defenses of the Baltics and Leningrad.