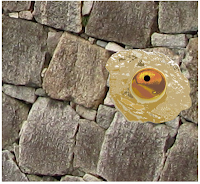 Resembling a gray-ish brown fried egg, the Trap Limpet was developed by a wizard as a variant of a homunculus, to set off and reload traps.

The Trap Limpet is capable of being taught to recognize a simple design, such as a uniform and will allow those displaying it to proceed unmolested.

The Trap Limpet is created using the blood of a willing minion -(In D&D terms a henchman), and only one Trap Limpet can be created for each minion.  The Limpet has only one hit point, can not move once placed and dies if forcibly removed from it's anchor.  The minion does not suffer any damage if the Limpet is killed, but does suffer a temporary one point loss of constitution when it is created.

The Limpet's telekinetic ability is essentially unrestricted, but quite slow so that it is incable of damaging anything directly.
Posted by Rod Thompson at 11:00 AM