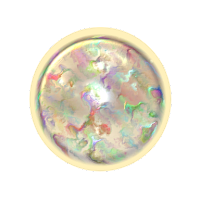 Sometimes a wish is granted or action is taken that changes the course of history ... for awhile.  For the truth is that not all desires can with stand the pressures of Time, Space, Fate and most especially the sheer mass of History, grinding into the future.

When a wish can not stay fulfilled, History, the sages agree, will form an event horizon around the wish and slowly push in until the wish has collapsed into an opalescent  sphere, resembling an extremely large pearl.  Thus encapsulating the altered reality.

After that the sages split into various schools regarding the properties and fate of the orbs.

The Amber school claims if you take one to the space between Shadows it will expand into a whole new reality.

The Alexandrian school claims that the altered reality, complete to the edge of the universe is still within the pearl. And that if you could but pierce the event horizon you could find yourself as you would have been.

The Ankh school agrees with the Amber school, but claims that you have to wait until the end of this reality, when all of the pearls will be able to expand and grow into new realities.

The Rel Astran school says that these are not complete new realities, but seeds of new planes.  The seeds can be "planted" in the Astral plane and nurtured through complex ritual magic to grow into a new plane of existence.

The Chendl school is an offshoot of the Rel Astran and says that the seed must be taken to the Ethereal plane rather than the Astral.

The Greyhawk school says that it's a load of ballocks that the Pearls can contain a new reality or plane.  They like to trot out what they say are Xagyg's research notes recovered by a band of intrepid adventurers, which show that he planned to use Pearls to contain the essences of the demi-gods he captured.

The sage Lysixenos, in his scroll On Infinity, relates the apocryphal story that St Cuthbert once offered such a Pearl to Asmodeus, offering to let him escape to found his own reality and never trouble humankind again.  Asmodeus refused with a wry smile, saying "Not again".
Posted by Rod Thompson at 4:13 PM