Book Review - The End of the Story 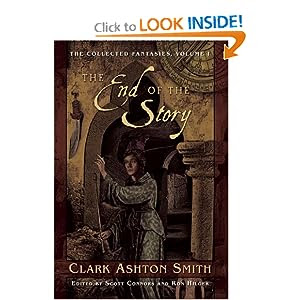 Clark Ashton Smith's The End of the Story is a a chronological compilation of his work, starting from the beginning.  There are three additional volumes in the series, which I plan on covering in due course.  It's impossible to sum up a group of stories only connected by author and date of publication.  The genre jumps from story to story, Averoigne to Hyperborea to Cthulhu to hard sci-fi and the writing quality varies, as one would expect from a beginning writer, harried by multiple editors.

CAS is considered one of the authors of the canon, despite not being explicitly named in Gygax's Appendix N, as he wrote for many of the same publications as, and was a close friend of Lovecraft.

I've linked items I've been inspired to write up from his work below.  I expect more will be added later.  Obviously, I find quite a few ideas in these stories, yet they're not an easy read.  He's one of the few authors who makes me reach for a dictionary - the last one was John Marshall in his The Life of George Washington - because of his extensive and anachronistic vocabulary.

I was tempted to recommend you find a more cohesive work, say his Averoigne stories, but then I realized how much of the inspiration is coming from the other genres he worked in.

Treasures
Goddess of the Ebon Moon
Portal of Eibon