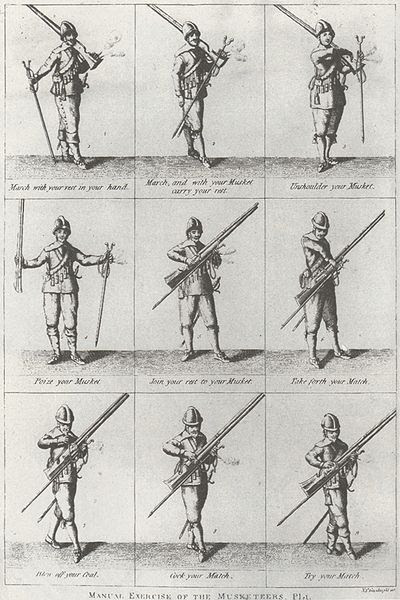 Continuing my look at firearms technology and how to mesh it with a fantasy campaign, I've spent some time researching the technology by by era.  As previously stated, firearms need to be categorized by range, rate of fire and damage.  The first two concepts are reasonably straight forward and documentation for them can be found in many locations online.  The third concept, damage, or more precisely it's target - hit points, has been a source of contention within the hobby for years.  D&D has always embraced the ever increasing hit point side, while RuneQuest and Warhammer allowed characters only minor increases to the amount of damage they could absorb at a time over their dangerous careers.

The second point of view, where characters' hit points are treated as a physical characteristic which remains near constant, is actually easier to model with firearms.  One bullet, like one arrow can kill a man and often will.  What I would like to come up with is a model which can handle either end of the system.   One other consideration in rule tinkering is playability.  The fewer number of rolls needed to resolve a situation, the better.

A weapon is any object that is used to apply physical force a creature with the intent of damaging or subduing it.  With that definition, it becomes apparent that damage is related to physical force, so the first step is to measure the physical force each type of weapon produces.  Physical force is equivalent to Kinetic Enegery KE and can be calculated in foot pounds by the formula (Velocity in feet/sec) squared * (Projectile weight in grains) divided by 450,240.

At first glance the above chart tells the whole story about why guns replaced bows and arrows - but it's deceiving.  I included the information on the longbow as a baseline for missile weapons, the limited force it applies (enough to hunt big game with) is outweighed by it's superior range and rate of fire for centuries.

You can see that if we scale damage linearly, we end up with a WWII M1 Garand doing 42 times the damage that a longbow is capable of.  That certainly takes care of hit point inflation, one shot one kill on many dragons and small gods.  But that's too powerful, many, but not all shots by a modern weapon will kill or at least functionally incapacitate the victim, but by no means all, so I have to scale it differently.  I decided to do damage brackets, using increasing multiples of 64 ft/lbs, so 64 ft/lbs and down would be one die of damage,64-196 ft/lbs would do two die of damage, etc.  I wasn't satisfied with the vanilla damages over ever increasing ranges, so I divided each range in thirds, thinking that I could use different die sizes (4,6 and 8) with the same multiplier.  But that doesn't work because 3d8 is more damage than 4d4.  That's when I had an 'aha!' moment, the die sizes can differ, producing a smoothly scaling damage model.  I also centered the first range bracket on 64 (Representing a standard arrow) and used the lower range for smaller than usual damage amounts.

One of he last questions on damage is the Critical Hit multiplier, in researching this I discovered that 1e did not have Critical Hits (funny I thought it did, maybe we house ruled them). For d20 systems a standard arrow does *3 on critical hits and the highest multiplier for any weapon is *4.  Of course, at 4*damage an M1 Garand will do an average of 130 points on a critical hit.  So I'm going to rule pistols and Handgonne's use a *3 multiplier, rifles and other long guns use a *4 multiplier on Criticals.

Knockdown - getting hit by a bullet involves the transfer of a lot of energy into a bag of flesh, often that will be enough to knock the victim off of their feet.  For Pathfinder, if the damage from a single round exceeds the victims CMD, they are knocked down.  For 3.x they will make a Fortitude save DC = damage to remain standing.  For 1e Save vs Paralyzation or be knocked down.

Massive Damage for all systems, I'll use a variation of the d20 Massive Damage rule.  If the damage exceeds 50 points (and you're still alive) Fortitude save DC (15+ damage/10) or die.