When last seen our intrepid party (minus the dwarf) had just entered the settlement of Smålplotz, consisting of a large ornate hunting lodge belonging to Baron Ludendorf, a cousin of the Elector-Count and a half dozen small dwelling of the local hunters and trappers.  Inquiring at the lodge they found that the lodge keeper was quite willing to rent out rooms when the Baron wasn't likely to find out and the dwarf was sitting drinking with a unkempt looking human dressed in a peasant smock, but wearing a beautiful wolf skin, clasped with a copper wolfs-head brooch.  The dwarf seemed none the worse for wear, and based on what the human was wearing, the party quickly deduced that Brother Peter was a cleric of Ulric; a member of an order known as 'The Brother's of the Wolf' or 'Ulric's Dogs' to the vulgar.  The wolf skin would be from an animal that he had slain singlehandedly with weapons he made himself, a la the opening scene in 300.  The bard and the elf had heard the rumor that all of the Brothers are lycanthropes themselves.
After explaining to the lodge keeper that they had been exploring the mountains from Wolfenburg, which he didn't believe but they paid cash,  the party picked up a few rumors of a hill giant organizing goblins in the mountains, a nearby wizard's tower and had a lengthy discussion about a fox raiding the local chicken coops once a month.  A fox that none of the locals, despite making their livings as trappers and hunters, had been able to capture.  A series of strange killings of animals and an old prospector out by the hills.  Brother Peter told them of his dreams sent by Ulric involving a blood red moon and and a haunting piping.  The party decided to ignore all of the adevnture hooks and to travel on with the nun and the aircrew to the nearest town of Hovelhof where a coach might stop by in a week or two. (You can lead players to adventure but you can't make them follow clues.)  The elf having a financial interest as the nun had promised them money. 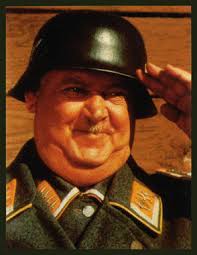 The following day, halfway to Hovelhof they encountered Sergeant Hans Schultz, his nephew Johann and two other mounted sergeant's at arms and several dozen levied peasants marching up the road to Smålplotz.
Schultz questioned them about where they had come from, as he would have remembered such a strange party (two elves and a dwarf) and of course the beautiful Fraulein, had they come through Hovelhof.
When the party told him the tale of having come from Wolfenburg, he informed them the province of Hochland was raising it's forces in response to the sack of Wolfenburg and Hans and his lads had been dispatched to deal with a band of chaos beastmen said to rampaging through the area.  He praised them for bravely cutting their way through escorting the beautiful Fraulein and said he needed experienced fighters like them to lead the pimply faced lads in the levy.  This was not greeted with enthusiasm by the party, especially when he offered to send Johann and one of the other sergeants as an escort for the nun and her companions to Hovelhof.  The elf insulted him by questioning his men's trustworthiness;  Hans pointed out that if they hadn't heroically escorted the nun, then they had deserted.  And the Elector-Count was a kind man who would probably let them stay in a dungeon for a long time before, regretfully, passing judgement and having their sword hands struck off. (You can however make the choice just a little bit clearer.)
The nun offered to write a letter of introduction to her boss, which was accepted in bad grace as she refused to let them read the contents before she sealed it.  The elf is fearful that it's a Rosencrantz and Guidenstern letter.  All they know is that it's addressed 'Oldenhaller - Nuln' and that she sealed it with some sort of housemark.  And so they bid adieu for a time to Fanny, Captain Mario, Dietrich, Volf the Intrepid and Mrs Munchner.  Zilda's player having decided to bring in a new character (Zolda?) to rather than continuing to play Volf.


Returning to Smålplotz, the village was all astir, as the Houltshoot boy had been reported murdered.  Brother Peter offered to take them to the site, a dark thick pine grove near the village that stank of blood.  A search of the area revealed a lot of tracks, but not much else as the entire village had been to see the site before they arrived.  On the way back to the village, Zolda noticed that someone was smoking hams an activity usually done in the fall harvest.   Schultz told them his plan was to send the locals out to scout for the beastmen while his troops stayed in the village where he could get a drink.
Zolda agreed to travel with Brother Peter to visit the sites of the other killings, while the rest of the party decided to stay and drill their levy's in preparation for battle. The first site was a clearing where the head, hands and feet of Auld Villie a local prospector had been found. Zolda found the prints of a large cat leading to the muddy banks of a small rivulet.  There the tracks stopped, the final set of the rear paws being pressed deeply into the mud and slightly elongated.
The next site was a rocky clearing where the head and paws of a bear were found, searching failed to turn up any tracks.  The final site being a meadow where they found the head and feet of a deer.  The deer's neck had a distinct puncture wound.  Again tracks of a large cat were found, this time there was a distinct tail drag with the tracks.  The tracks stopped near a large oak tree.
Backat Smalplotz, Zolda and Brother Peter discussed the inconsistencies they had observed with the rest of the party. Where the Houltshoot boy's murder had been done in a thick copse, the rest were clearings and the lack of any remains at the boy's site.  They also wondered more about the hams being smoked; i.e. were they pork or long pork?.  Zolda was convinced that they were dealing with a were-cat of some sort and suspected that it was the Houltshoot boy's father.  They found that Houltshoot was the one smoking hams and he was sitting over in the corner.  Unsubtly asking him why he was smoking hams; he denied that he was, exclaimed that he had just lost his son and they should leave him alone.  Then he left the lodge for his house.Zolda and Rocco the fighter followed him, but didn't learn anything.
The next morning the dwarf was woken by the watch they had posted, the sentries having heard a strange piping and rustling sounds towards morning.  Investigation found a couple of copper pieces on the grass and more of the disappearing cat tracks.  Rocco (finally) put the clues together and wondered if they were dealing with a griffon, but realized that griffon's prefer horse meat.  His speculation did inspire the others to realize that it was quite likely a manticore they had on their hands.
The party had to put aside both the manticore and the Houtshoot boy, as the scout came back with the news that the beastmen had been found heading their way.  When the started talking about preparing the village for defense Schultz laughed and said they didn't know anything about war.  They'd go out and attack the beast men, 'Chust line your boys up on either side of us and don't let them surround us.  Ve'll do the rest.'
The beastmen (foreground) occupy a line between a defile on the left and heavy brush on the right.  From Left to right, Zolda, Rocco, Schultz (white counter, his two surviving sergeants are grey) elf and bard with their troops in column, dwarf has his troops in echelon.  The beastman witchdoctor on the rock has just Disintegrated one of the sergeants.  The players neglected to ask to give their troops any missile weapons, so Rocco, the elf and the bard's troops are taking casualties.

The witchdoctor misses Schultz.  Rocco defeats the first beastman leader in single combat (killed it with one blow) causing one stand of the beastmen to rout off the map.  Schultz's cavalry has evaporated another stand of beastmen and the dwarf flambeed a stand.

Zolda has changed her troops into column is marching her troops towards the battle.  Rocco has defeated another beastman champion, this one with the head and tail of a crocodile which gave Rocco a nasty bite.  But victorious, Rocco's troops have defeated the beastman left wing.  Schultz and the cavalry have punched completely through the beastmen lines and are beginning to circle back.  The dwarf continues his long distance flambe, while the elf's and bard's troops begin the attack.  The bard's troops have been inspired by her oratory and fight fiercely.  The beastmen's mrale breaks and they begin fleeing as best they can.  The witchdoctor, who has the legs of a goat, but the head, torso and wings of an ant flies away.

Schultz calls off the pursuit, 'Ve smashed them goot. Now time for beer and Frauleins, jah?'
[I used the miniature rules from Chivalry and Sorcery for the battle, allowing players to take six actions in each turn.]

Returning to the village for the celebration, the dwarf kept buying beer for old man Houltshoot, while the Rocco and Zolda did a little breaking and entering.  Inside they found a very normal building, except for the trap door being held down by the woodbox.  Moving it, they entered the root cellar and found the hirsute Houltshoot boy. His father has been hiding him.  They reported what they found to Brother Peter, who thanked them saying he had suspected as much and asked Zolda and the bard to accompany him in a couple of nights when the moon will be full.  Morning brought another wake up call from the manticore, but it's failed to entice any of the peasants out for a bite.  And the session ended with the party deciding to check out the wizard's tower before following the nun, Schultz and his troops down to Hovelhof.
Posted by Rod Thompson at 2:13 PM