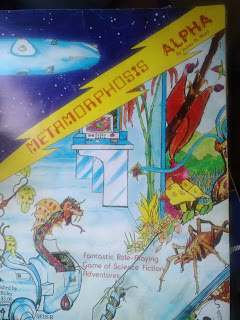 The second RPG I ever bought - I think.  I'm really no longer

sure when I picked it up, I believe I wasstill in High School, so that puts it in the 1977-1979 date range.  I only played it once or twice, but made a lot of maps of the various levels of the starship Warden.  There wasn't enough setting details to give me traction on how to run a campaign in this system.  After a few decades of experience, yes, just make a McGuffin and build a few adventures around it.  I have used the mutation tables as a source of inspiration and had a duralloy shield show up as a treasure once.  That campaign took a different turn and they never encountered the landing party.

Anyway, it's James M Ward's "Fantastic Role Playing Game of Science Fiction Adventure"  and cost me a cool $5 plus tax new.  Players have the option of playing human, mutated human, or mutated creature (animals or plants!).  All of them are barbarians living in a generation ship voyaging between the stars, a la Robert A Heinlein's Orphan's of the Sky - from which it draws obvious inspiration.

It's influence is seen in Gamma World (coming up on the January 7th) and, of course, the classic module Expedition to the Barrier Peaks.

Radiation Resistance - the ability to withstand the damaging effects of radiation

Mental Resistance - the ability to withstand psionic and mental attacks.  This one is increased by one for every 5 successfully resisted attacks.

Dexterity, Constitution, and Strength are the same that we see in so many RPGs, although Your Constitution determines the number of d6s you roll for Hit Points.

Leadership Potential - Really it's D&D Charisma stripped of the unfortunate connotation of physical beauty.   It's how many followers you can have and how likely a friendly mutant will follow you.  Only humans have Leadership Potential, no one likes the mutants.

Radiation Resistance, Mental Resistance and Poison all use cross reference charts of attacking strength vs defending strength that were so basic to the hex and counter military board games of the day.  The intersecting values for Radiation showed how many turns you would last before taking damage; Mental Strength gave you target number or auto success or failure - rather like the Clerical Turn Undead charts.  Poison works against Constitution and shows which of three possible outcomes are faced by comparing the Poison Strength to the Constitution: Ignore it, Die and 'Get an Antidote with N Turns or Die'.

Ix Kaknab often passes as a regular human with his brunette hair and reddish brown skin.  His eyes give away his true nature as they are milky white orbs including the pupil and iris, so he is usually encountered wearing a deep hood.

His hands have short claws that can inject a Strength 11 Poison.  His Heightened Touch gives him a better chance of figuring out the use of ancient technology or identifying weaknesses in an object.

He can use Telekinesis to mentally move objects around.  Useful when you want to see if that's a vine or snare on the ground.  Once a day he can project a Force Field ahead of him that will absorb 5 dice of damage.  He can also change the molecular density of another being once a day, increasing their armor class (useful for a friend) at the expense of their speed (a slower enemy is one he can run away from).

He avoids combat, as Hemophilia means he needs attention to every cut to avoid bleeding to death.  His epilepsy is triggered by joining large (>4) groups.  There is a 5% chance each time he is in one that he suffers an attack of paralysis.